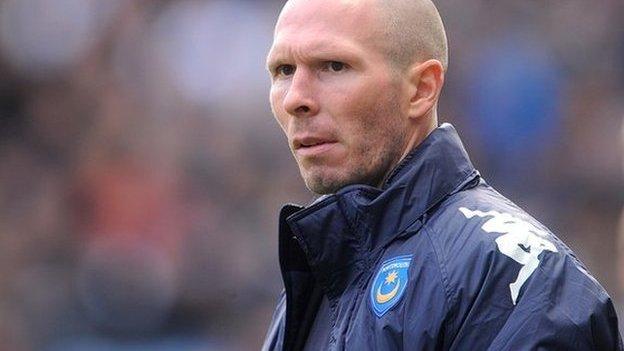 Portsmouth manager Michael Appleton says interested suitors of the club should act on their interest after news of a fifth bidder emerged this week.

The fifth bid is from Portco Ltd, a group of UK investors fronted by Scottish businessman Harry Kerr.

"It's one thing putting a bid in for a football club, but there is another thing actually putting your money in," Appleton told BBC Radio Solent.

The Pompey Supporters' Trust and Balram Chainrai's Portpin remain in pole position to take over the stricken club, who have been in administration since February.

Where were they back in May? Why are they coming in so late?

The club are nearly £61m in debt and are also attracting the interest of former owner Sulaiman Al Fahim, and ex-Watford owner Laurence Bassini.

Portco made its interest known on Wednesday while Al Fahim, despite revealing his interest two weeks ago, is yet to show proof of funding to administrators PKF.

PKF are expected to choose a 'preferred bidder' in the coming days with the Football League close to resolving its outstanding issues with both Portpin and the PST.

Once it has, it is then up to Birch to choose the best option for creditors of the club - who have already agreed a company voluntary arrangement with the pair.

So Appleton has urged caution over the latest bidders for the club.

"Where were they back in May? Why are they coming in so late?" he said.

"Once you have got money to pay for the football club, what are your plans for it? Are the Football League going to be happy with those plans and are the PFA?

"The fact there are more people out there willing to buy the club is great but it's important we get the right ones."