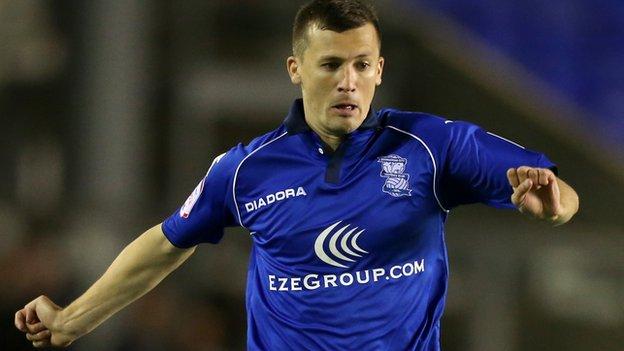 Birmingham City right-back Paul Caddis is facing the prospect of undergoing surgery after dislocating his shoulder in Tuesday's 2-1 home win over Bolton.

"It's horrendous luck," Clark told BBC WM. "Even before my time the right-back position at the club has seemed cursed.

"Any time a right-back comes in, they seem to end up with a serious injury."

Clark added ruefully: "Every time I phone anyone looking for a replacement I get a refusal.

"I lose who I consider to be the best right-back in the division for what looks like being most of the season.

We're in the process of getting a second opinion, but everything points to him needing surgery and being out for up to three months

"Then when I get someone who proves a more than adequate replacement, who for the last three games has been exceptional, he gets a problem with his shoulder."

One short-term solution for Saturday evening's home clash with Barnsley might be to switch midfielder Jonathan Spector to the problem right-back berth.

But Clark is reluctant to tinker with his engine room after an encouraging run of seven points out of a possible nine.

"It's no coincidence that over the last few games we have looked a lot more energetic in midfield," said Clark. "And Jonathan Spector has been a big part of that.

"But there are other possibilities inside the club."

Fit-again Curtis Davies is one option, while American teenager Will Packwood is Clark's other possibility as the Blues boss waits to discover the full extent of the injury suffered by on-loan Swindon Town defender Caddis.

"We're in the process of getting a second opinion," said Clark. "But everything points to him needing surgery and being out for up to three months."