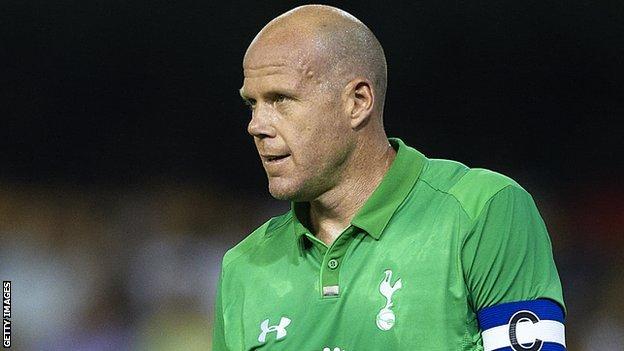 Barthez told a French newspaper that it was "incomprehensible" that Friedel should be playing ahead of new signing and fellow Frenchman Hugo Lloris.

Friedel responded on Twitter, saying: "Just saw Barthez comments. I normally don't comment but when disrespected by someone I don't respect I must.

"Barthez was ignorant, disrespectful and out of order to mention my name."

American shot-stopper Friedel, who has made a record 308 consecutive Premier League appearances, has started all four top-flight games for Spurs this season.

Meanwhile Lloris, France's 40-cap number one, had to wait until to make his Tottenham debut, after

It is a situation that has surprised followers of the keeper's fortunes in France, particularly Barthez.

"Lloris is one of the five best goalkeepers in the world," Barthez, who made 139 appearances for Manchester United, told Le Parisien.

"He is faster than Friedel, he jumps higher and he is very strong mentally.

"What is happening now is incomprehensible, but I'm not concerned. He will become the centre-piece of the club.

"Hugo is a calm guy, a good worker. Tottenham will not let him stay on the bench for a long time."

Lloris meanwhile has also been talking to the French press, suggesting he is eager to make inroads at White Hart Lane.

"The choice lies with the coach but I'm here to shake things up a bit," he told L'Equipe.

"I'm not worried, if Tottenham came looking for me at Lyon, then surely I will play a part in the future of the club.

"I just hope that I get the chance to play.

"To get a bit of playing time [against Lazio] while I'm still settling in, getting to know the club and my new team-mates, that can only be a good thing."