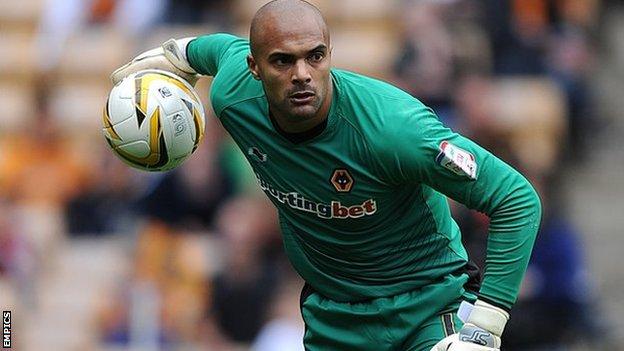 Wolves keeper Carl Ikeme says the quality of the defenders in front of him has paid a big part in their mean start to the Championship season.

Stale Solbakken's rebuilt side have let in just nine goals in 10 league games.

Ikeme, 26, told BBC WM: "The back four have been quality, literally putting their body on the line.

"We've got a lot of height in the team. I don't feel nervous, as we've got Roger Johnson and Christophe Berra in the team heading everything away."

Life under new manager Solbakken did not begin too well when Wolves picked up just four points from their first four games.

But, since stopping the rot with a 2-1 home win over Leicester City, Wolves have climbed to third, having kept clean sheets in four of their last five league games - and the two that did evade Ikeme were both class finishes from Crystal Palace's highly-rated young striker Wilfried Zaha.

"It was a bit shaky to start off with," Ikeme told BBC WM. "A lot of new faces and there was a lot of uncertainty.

"But everyone's settled in now and we're starting to look a good side.

"It was difficult for everyone, and the manager, as he did not know who was coming or going, but the players he's bought in are quality.

"Bakary Sako is making us look very dangerous from set pieces. He's got a rocket of a left foot. If the net wasn't there he'd be taking somebody out in the stand."

It also makes for exciting times for the faithful Ikeme, as he enjoys his longest run in the Wolves team.

Wales number one Wayne Hennessey's cruciate knee ligament injury (he is hoping to start his comeback in the reserves on Monday) and pre-season transfer speculation linking Dorus De Vries to Liverpool, saw Solbakken give Ikeme the keeper's jersey back in August.

But he is the first to admit that having seven spells out on loan over the past six years has been a help, not a hindrance.

"The loan system has been brilliant for me," said Ikeme.

"It's not what I wanted at times. But, looking back, it has given me lots of experience.

"From Doncaster Rovers, struggling at the bottom of the league, to Middlesbrough doing well at the top.

"All different experiences to help you progress.

"I'm a bit part of the furniture here. But I don't want to get dusty.

"And I'm still young for a keeper."