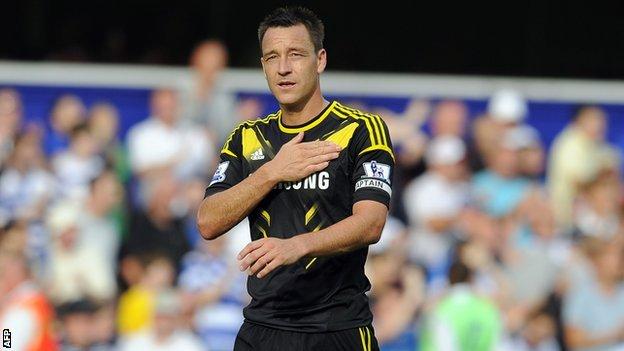 For more than a decade, John Terry has captained Chelsea, leading the Premier League club during its most successful era.

Blues supporters regard the 31-year-old centre-half, who came through the youth set-up at Chelsea, as both a great skipper and a club icon.

A banner displayed at every home game at Stamford Bridge has a picture of his face alongside the words: "JT CAPTAIN, LEADER, LEGEND."

Terry has lifted more trophies as Chelsea captain than all his predecessors put together.

Yet he remains a divisive figure, thanks largely to a number of off-field controversies, particularly an alleged affair with a team-mate's ex-girlfriend that cost him the England captaincy in 2010.

Born in Barking, east London, Terry made his name as a teenager, making his first-team debut as a 17-year-old.

Three years later, he captained Chelsea for the first time.

World Cup winner Marcel Desailly played alongside Terry from 1998 to 2004.

"There will be plenty of foreigners who will come and go, but he will stay there and make the new players understand the spirit of the club," said the Frenchman.

In his first full season as Chelsea skipper in 2004-05, Terry led the club to the Premier League title for the first time.

The defender started 36 of the 38 Premier League matches that season and was crowned PFA Player of the Year.

"When you say that John Terry was a fantastic captain for me, you are right," said Jose Mourinho, who was boss during that successful period.

Terry was first called up to the England squad by Sven-Goran Eriksson in June 2003. His first international cap may have come sooner.

In the summer of 2002, when he was tipped by some to make England's World Cup squad, he instead found himself in court accused of attacking a nightclub doorman with a bottle. The jury found him not guilty.

Terry played in his first World Cup in 2006. England went out at the quarter-final stage but he was named in the tournament's all-star squad, the only Englishman to earn the honour.

Shortly afterwards, he was made England captain by Steve McClaren, Eriksson's successor.

The year 2008 was not a particularly good one for Terry. Chelsea lost in the League Cup final against Tottenham and he missed a key penalty in the Champions League final against Manchester United. He was also fined £60 for parking his Bentley in a disabled bay.

Terry was stripped of the England captaincy for the first time in February 2010, following allegations he had an affair with the ex-partner of Wayne Bridge, his former Chelsea and England team-mate.

Terry tried to prevent the media from reporting the allegations, but failed.

Then he found himself in the headlines again when Bridge refused to shake his hand before a game between Chelsea and Manchester City.

Within months of that controversy, Terry led Chelsea to a league and cup double.

Terry kept his place in the England team after the 2010 World Cup despite being criticised for his defending during the tournament.

He also came under fire for speaking negatively about the team's performance in a news conference out in South Africa.

To the surprise of many, Terry was reappointed England captain in March 2011 after Rio Ferdinand - the man chosen as his replacement as skipper - suffered a long-term injury.

But Terry's second spell in charge did not last long and also ended in controversy.

He was alleged to have made racist comments towards QPR defender Anton Ferdinand, Rio Ferdinand's brother, in a Premier League game on 23 October, 2011.

Terry denied the charge and was found not guilty at Westminster Magistrates' Court, yet he was still relieved of the captaincy in February by the Football Association, a decision that angered Fabio Capello, who resigned as England boss in protest shortly afterwards.

Terry helped Chelsea to victory in the FA Cup final and Champions League final at the end of last season, although he missed the latter event because of suspension.

Despite Chelsea's successes, critics questioned whether Terry's footballing ability was on the decline.

Then came Euro 2012. Despite England's exit to Italy in the quarter-finals, a series of strong performances restored his reputation.

Euro 2012 proved to be Terry's swansong at a major international tournament.

He announced his England retirement on 23 September, claiming the FA's decision to pursue charges against him in relation to the incident with Anton Ferdinand had made his position "untenable".

The negative headlines continue to stack up, but Terry grabs his fair share of good ones.

He supports a number of charities and has campaigned against knife crime. He also made a donation to help keep afloat the football team he played for as a boy.