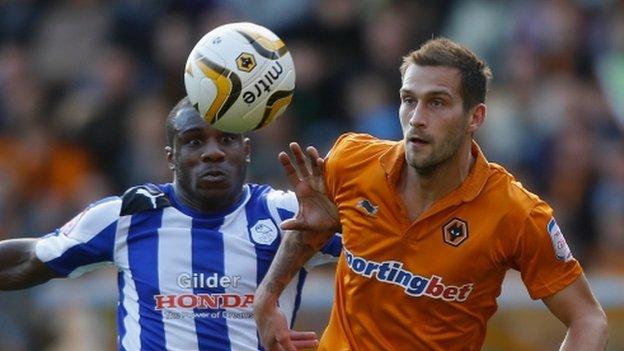 Kevin Doyle and Sako both went close from distance before high-flying Wolves took the lead just before half-time.

Sako fired under the wall and into the bottom corner with his second attempt, having been booked for taking an initial wayward effort too early.

The Wolves keeper was a spectator for long periods of the game, especially in the second half.

There were few chances of note after the break at the other end too, with Wolves happy to sit on their one-goal lead.

Stale Solbakken's side ran out comfortable winners, clinching a fourth successive league win for the first time since November 2008 and also extending their unbeaten run at Molineux.

Their third win of the season means they have already equalled the total number of victories they managed on home soil throughout the whole of last season in the Premier League.

Wednesday, in contrast, fell to a sixth straight defeat since seeing their 19-match unbeaten run come to an end.

Wolves manager Stale Solbakken: "We were by far the best team. They did not have one chance all game.

"We controlled the game for long, long periods and should have made more of the possession.

"It was a well-deserved victory."

Sheffield Wednesday manager Dave Jones: "At the moment the players feel everything they do is going against them.

"We created good chances against a good team but when things aren't going well people tend to snatch at things.

"We just have to keep going and relax a bit more in front of goal."