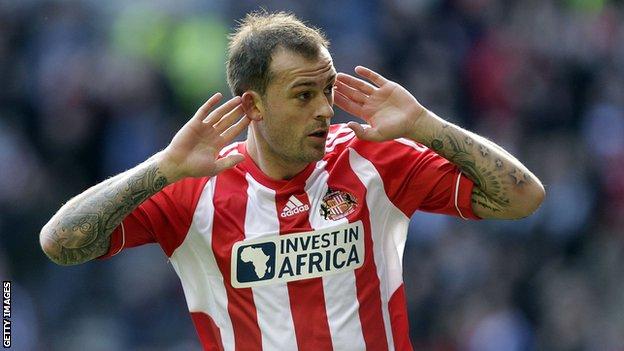 Steven Fletcher's fifth goal in four Premier League games gave Sunderland their first win of the season against 10-man Wigan at the Stadium of Light.

The visitors enjoyed the better of the first half but life was made difficult for them when Jordi Gomez was sent off on 48 minutes for a foul on Danny Rose.

Sunderland's victory ended a run of 12 Premier League games without a win.

It was the Black Cats' first Premier League win since March.

The home side were given a welcome boost before kick-off as Adam Johnson, who injured his thigh while training with England earlier this month, passed a late fitness test to take make his first appearance at the Stadium of Light since signing for Manchester City last month.

Another of Martin O'Neill's new recruits, Fletcher, went into the game having scored all of Sunderland's goals so far in the Premier League and he was almost presented with an opportunity for another inside the first minute when Ali Al-Habsi was caught unawares by the striker, but the Wigan keeper was able to clear just in time.

However, it was the visitors who settled into the game more quickly and only a superb save by Simon Mignolet prevented them from taking the lead after 15 minutes. Jean Beausejour's first-time ball across goal found Arouna Kone at the far post, but his point-blank shot was superbly denied by the Belgian.

Sunderland came close to opening the scoring with their first real chance on goal in the 26th minute.

Fletcher was fouled on the left side of the area and Sebastian Larsson's free-kick looked destined for the goal, but Ivan Ramis was on hand to scramble the ball away.

Despite that chance it was the visitors who finished the half stronger as Kone headed over, before James McCarthy's low drive from distance flew just wide of the upright.

But the second half was to be a much harder proposition when, on 48 minutes, Gomez was shown a straight red card for a two-footed lunge on Rose.

It took the hosts only three minutes to capitalise on their man advantage.

McClean scampered down the left towards the area before delivering a low ball towards the far post, where Fletcher raced in to smash an unstoppable drive beyond Al-Habsi.

That goal sparked Sunderland into life and they had a couple of chances to add a second minutes later as Stephane Sessegnon first saw his low shot pushed behind by Al-Habsi, before the Benin midfielder was just wide with an effort from McClean's cross.

But after that brief flurry of chances, the game descended into a scrappy affair, with both sides struggling to create inside the final third.

Sunderland manager Martin O'Neill: "We have the win and we are unbeaten so far this season. Steven Fletcher was fantastic, not just scoring the goal but his overall centre-forward play. He was terrific, he is a really fine player.

"I am not concerned that our goals are only coming from him at the moment, but I think in time that if he is the one who continues to score for us and no-one else does then that might become a problem. A lot of others are doing good things for us in this run and it will come in time.

"Having a player sent off like Wigan did today does mean you have to re-adjust. During the week in the Capital One Cup, when we lost Lee Cattermole, I am sure that gave MK Dons a major boost and I am sure that is what happened for us in this game."

Wigan manager Roberto Martinez: "I thought we were the better side in the first half and it was a shame we could not convert any of our chances.

"We tried to push on and put Sunderland under pressure but the things that went against us I don't think we could have done much to control them.

"Every defeat is a concern, you don't want to lose games and it is as simple as that. I thought our first half performance showed we are a team who create opportunities. There was nothing we could do about this 90 minutes and now we must concentrate on our next game."