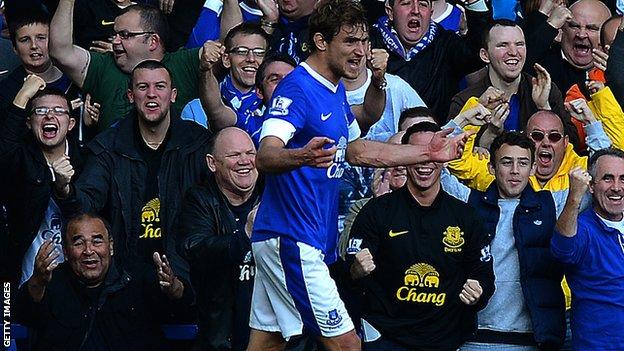 Two goals by Nikica Jelavic continued Everton's flying start to the season as David Moyes's side came from behind to seal a fourth win in six league games.

But Leon Osman levelled from eight yards after a cross by Kevin Mirallas, who then threaded a pass for Croatian striker Jelavic to make it 2-1.

Jelavic cemented victory with a header after good work by Seamus Coleman.

While Southampton have now conceded an alarming 18 goals in six Premier League games, Everton's latest success adds weight to the belief that Moyes's men can challenge for Champions League qualification.

The hosts, now up to second in the table, displayed great character to recover from a desperate start to score all three goals in the space of 13 first-half minutes and leave the Saints longing for the half-time whistle.

On the eve of the match, Moyes, in the final year of his Goodison Park contract, ruled out imminent discussions to resolve his long-term future, the Scot insisting he was more concerned with concentrating on his team's healthy start than sorting out his own future.

But Blues fans will be anxious chairman Bill Kenwright secures Moyes's signature in the coming weeks before another club comes knocking for the 49-year-old.

Everton's sixth win in seven home league games was achieved the hard way after the Saints took a shock lead.

While Moyes will be delighted to start October near the Premier League summit, he will have been unimpressed with the shabby defending that allowed Ramirez, who was totally unmarked, to head Lallana's sixth minute corner beyond Tim Howard.

John Heitinga was presented with a chance to equalise moments later but headed straight at keeper Paulo Gazzaniga before Jay Rodriguez flashed the ball across the face of the Toffees' six-yard area in a thoroughly entertaining clash.

It proved a costly miss by the former Burnley man, Everton regrouping to turn the game upside down with three quick goals.

Midfielder Osman lashed the ball home from eight yards after the Southampton defence made a hash of trying to clear Mirallas's dangerous cross.

With Marouane Fellaini oozing confidence and Jelavic in fine form, it was only a matter of time before the hosts took the lead.

Jelvavic made it 2-1 from an acute angle after Mirallas's beautifully threaded pass.

The former Rangers man then netted his third league goal of the season, a powerful header at the back post which Gazzaniga got a hand to but could not keep out.

But the Toffees were worthy winners, Fellaini heading against the bar before Osman and Mirallas both went close to increasing the lead.