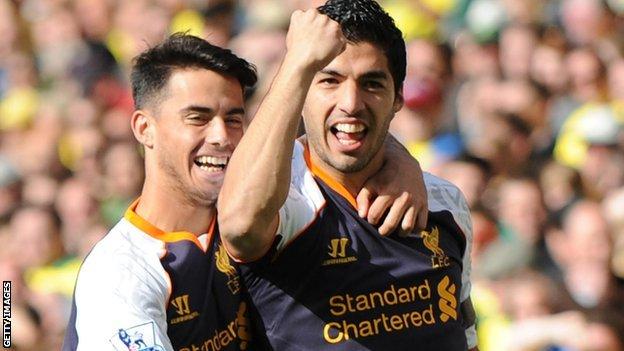 Luis Suarez scored a hat-trick to lead Liverpool to their first Premier League win of the season as they beat Norwich.

Suarez drilled in a strike from the edge of the box before stroking in a second following a defensive mistake.

The Uruguayan set up Nuri Sahin for a tap-in and Suarez curled in shot for his hat-trick before Steve Morison drove in an effort for the home side.

It is the second hat-trick Suarez has scored at Carrow Road in consecutive seasons and was the culmination of a Liverpool display in which they had passed and purred their way to victory.

The "ole"'s were ringing out from the Reds fans towards the end of the game and, while an inspired Suarez will rightly steal the headlines, 18-year-old playmaker Suso also caught the eye. He was making his first Premier League start along with right-back Andre Wisdom.

Liverpool, like Norwich, had argued that their performances had not been reflected in results but neither side could have any such complaints after a game in which the Canaries succumbed to their dominant visitors.

The home side did not help themselves with the type of poor defending which led to Liverpool's opener.

"Liverpool won this match with embarrassing ease and gave the crowd a lesson in passing the ball. Plenty for Liverpool fans to feel positive about. Five-star Liverpool, and Luis Suarez was the star of the show."

Canaries centre-back Michael Turner could only clear Glen Johnson's pass to Suarez and he clinically drilled a shot into the bottom corner.

The visitors were swarming all over the home side, but Simeon Jackson had a chance to provide Norwich with a lifeline.

He met a cross to the far post with a first-time shot only for Reds keeper Pepe Reina to smartly save.

Jackson also volleyed wide for Norwich and an equaliser would have given Liverpool boss Brendan Rodgers another reason to complain to referees' chief Mike Riley again as, earlier on, Suarez was denied a penalty following a clumsy Leon Barnett challenge.

Gerrard had a header saved before Suarez should have had his second when he was clean through on goal only to put his effort wide.

The Liverpool striker quickly made amends as he caught a napping Turner in possession and curled a shot past keeper John Ruddy with the outside of his foot.

Norwich boss Chris Hughton sent on Holt after the break but, when Andrew Surman's shot ricocheted over off Robert Snodgrass from a yard out, he must have feared the worst - and rightly so.

The home side's tormentor Suarez turned from goalscorer to provider as he crossed for midfielder Sahin, who was rewarded with a start after his two goals in the midweek League Cup win over West Brom, to slide in a close-range shot to put the Reds 3-0 up.

Liverpool's emphasis on the passing game under Rodgers was reaping its rewards after a difficult start to the campaign and Suarez steered a shot past Ruddy as the Canaries defence stood off him.

Morison gave the home side a rare moment of solace when he drove in a shot after Reina parried the ball into his path following a Russell Martin shot.

But Liverpool did not allow their hosts any respite as Gerrard's long-range strike deflected off Barnett on the way into the net.

Holt scored his first goal of the season as Liverpool took their foot off the gas when he angled a shot into the far corner, although it did little to disguise a comprehensive defeat as the home side were booed off.