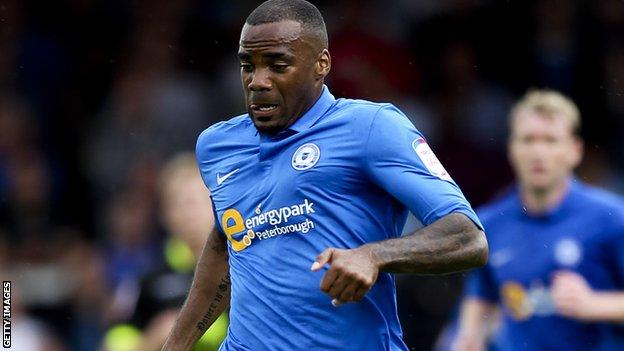 Emile Sinclair scored a hat-trick as Peterborough ended a seven-match losing run in the league with victory at Hull.

The 24-year-old former Nottingham Forest striker kept his composure to round keeper Ben Amos and open the scoring.

Sinclair doubled the score after George Boyd played him through, before Jay Simpson netted for Hull from 12 yards.

But Sinclair secured the points after completing his hat-trick with another individual effort.

Hull were chasing a seventh straight home win but were undone by Sinclair's pace and power.

Having scored twice at the venue for Macclesfield last season, Sinclair opened the scoring in the 23rd minute after blocking a clearance on the halfway line, executing a perfect tackle on Stephen Quinn before racing clear to go round Amos.

It was 2-0 eight minutes later when Boyd played Sinclair through on goal, before Simpson set up an exciting finish by reducing the deficit with a fine 61st minute effort.

But man-of-the-match Sinclair earned Posh their first league win since the final day of last season after another individual run and fine finish from the edge of the penalty area.

Hull City manager Steve Bruce: "It was one of them awful games, we were punished for individual errors. You can't make the mistakes we did, individual mistakes on the first and second. We were littered with bad ones.

"We got back in it, we have them and then give them the third one where he runs through and scores. In the first half an hour, there was only one team in it but that's football."

Peterborough manager Darren Ferguson: "This gives us a platform. It was always going to be a big week for us.

"We knew it would be tough. They had won every game at home, but we know how to win a game. Hard work and team spirit. We showed that, but it's one win."