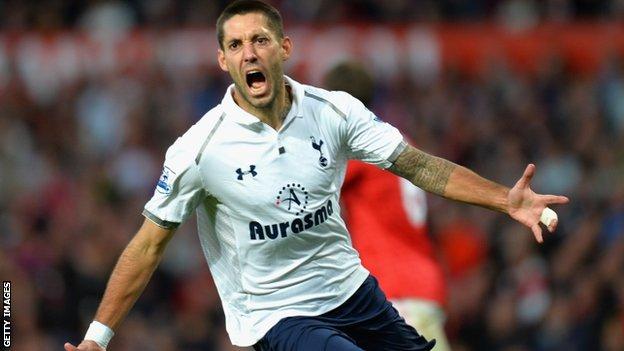 Tottenham ended their 23-year wait for a victory at Old Trafford as they held on to take the points against Manchester United in a pulsating encounter.

Spurs looked to be in total control after first-half goals from Jan Vertonghen and Gareth Bale gave them a comfortable advantage at the break.

But United, who were awful in the first period, hit back through Nani before Clint Dempsey restored Tottenham's two-goal advantage.

Shinji Kagawa immediately struck again for United as they poured forward in a bid to maintain their long unbeaten run against Spurs.

United pressed hard with substitute Wayne Rooney and Michael Carrick hitting the woodwork and they saw several appeals for a penalty waved away by referee Chris Foy.

It was a victory which delighted the large contingent of Tottenham fans who last saw their side win at Old Trafford in 1989 when Match of the Day presenter Gary Lineker scored the winner for Terry Venables' side.

For United, it was their second defeat in six Premier League games, and manager Sir Alex Ferguson could have more defensive injury problems after Jonny Evans finished the game in some discomfort.

End of an era

Watching England manager Roy Hodgson will not have seen anything to change his mind about not picking United defender Rio Ferdinand for "footballing reasons" since taking over from Fabio Capello.

Ferdinand struggled against Tottenham's dangerous forward line and he did virtually nothing to boost his chances of a call-up for the World Cup qualifiers against San Marino and Poland in a fortnight.

Tottenham stunned the vast majority of the 75,566 crowd inside two minutes when they took the lead after a neat one-two between Vertonghen and Bale.

United backed off and Vertonghen burst into the penalty area and evaded a half-hearted Ferdinand challenge before striking a low shot which deflected into the net off Evans.

It was a lead Spurs deserved as they took the game to United who barely had a touch in the opening 10 minutes.

Tottenham looked assured and totally in control with Dempsey and Mousa Dembele dominating in the centre against a largely ineffective Ryan Giggs and Paul Scholes.

With United struggling to make any impression inside the visitors' territory, Spurs doubled their lead with a fabulous goal which sliced a hole straight down the heart of the home defence.

Dembele broke from the halfway line and slipped the ball to Bale who ran on and ghosted through the United defence before hitting a cool finish past Anders Lindegaard.

With Wayne Rooney on for Giggs after the break, United predictably picked up their pace as they went in search of a goal and it was not long before the game took an incredible twist with three goals in just 139 seconds.

This is only the third time in Premier League history that Man Utd have lost two of their opening six games in a season. On the other two occasions (2002-03 and 1992-93), they ended up winning the league.

United broke through when Rooney crossed for Nani to fire home from six yards but Tottenham immediately restored their two-goal advantage when Bale's fierce shot was only half-saved by Lindegaard allowing Dempsey to tap in.

A fifth goal followed seconds later as United swept up field and Kagawa slotted in their second from Robin van Persie's slide-rule pass.

United continued to surge forward and Rooney was unlucky with a sweetly struck free-kick which crashed back off the woodwork before Van Persie had an effort which was correctly ruled offside.

Tottenham had to dig deep into their defensive reserves as United, with Danny Welbeck on for Kagawa, pressed forward in search of an equaliser.

There were several penalty appeals, including what looked like a handball by Sandro, and a number of near misses as Michael Carrick's header glanced off the woodwork.

Tottenham took the sting out of United's forward runs and in the end they just about deserved their victory.