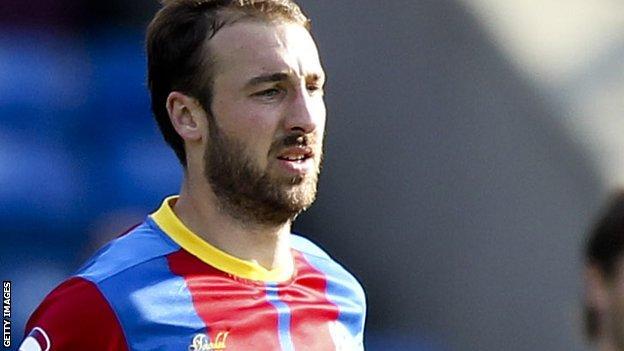 Crystal Palace earned a victory at Bolton courtesy of a late penalty from striker Glenn Murray.

Wilfried Zaha was a constant threat for Palace and it was his trickery which drew a foul from Zat Knight for the crucial spot-kick after 80 minutes.

Murray slotted the penalty past Adam Bogdan for the winner.

Chung-Yong Lee went close to an equaliser when his shot whistled past the post but Palace held on for a fourth league win in five games.

Zaha had quickly given an indication of the danger he posed when he had a first-time angled shot parried away by keeper Bogdan.

Palace, who move up to seventh with the victory, were playing on the counter-attack and Murray headed an Owen Garvan cross straight at the Bolton keeper.

The home side were denied a penalty for a possible handball, before Bolton striker David Ngog had a close-range shot blocked by Damien Delaney.

Kevin Davies was making his 700th career appearance and he and Trotters winger Chris Eagles both went close.

Mark Davies also looked set to score for the home side only to have a well-struck shot bundled away by keeper Julian Speroni.

But the decisive moment came when Palace were awarded a penalty, which Murray kept his cool to slot home.

Bolton manager Owen Coyle: "Goals change games and this result's really hard to take. We have previously built momentum but now we have taken a backward step which is really disappointing.

"We just want an even break and we are clearly not getting that at the moment.

"The bottom line is that we've got to pick ourselves up and get the points in our next game against Leeds, which will be another real tough game."

Crystal Palace manager Dougie Freedman: "We've played against Cardiff, Nottingham Forest and Middlesbrough over the last few weeks and that was by far our toughest challenge.

"There is no doubt in my mind that they will be in the top two or three at the end of the season and this has to be our biggest scalp so far this campaign."