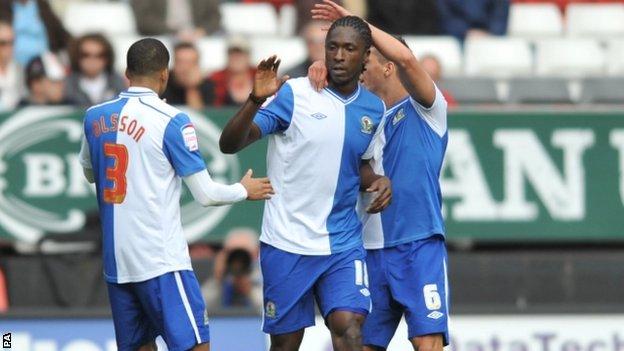 Blackburn began life after Steve Kean with a draw at newly-promoted Charlton.

Johnnie Jackson then missed a penalty for the hosts but he made amends when he diverted a shot from Danny Green into the net.

Rovers on the road

Blackburn took the lead when the recalled Morten Gamst Pedersen played in Etuhu, who danced between the static Chris Solly and Michael Morrison before rifling the ball into the net.

It was his first goal for the club since joining from Fulham in the summer and was greeted by chants of 'Stand up, if you're glad he's gone' from the travelling fans.

Charlton should have drawn level when Pedersen was adjudged to have brought down Leon Cort in the area.

But Jackson's penalty, blasted straight down the middle, was kept out by the legs of goalkeeper Paul Robinson.

It was only a brief let-off for the visitors, however, as 60 seconds later Jackson slid in to steer a shot from Green past Robinson.

With Blackburn now penned in their own half, Green saw a low shot deflected onto the post.

Nuno Gomes volleyed over and Jordan Rhodes headed wide after the break as Blackburn pushed on, but they needed a stoppage-time save from Robinson to tip over an acrobatic scissor-kick from Bradley Wright-Phillips.

Blackburn caretaker manager Eric Black: "The resilience and the attitude of the players was excellent, they made it an awful lot easier than it could have been.

"There was a real vibe in the dressing room, it was just 'let's get on with it'."

"All our prep was thrown out of the window when Ricardo Fuller was taken ill before the game, but we showed good character after going a goal down and were on the front foot for most of the game.

"I'm sure Blackburn, with all that has gone on, are pleased with a point."