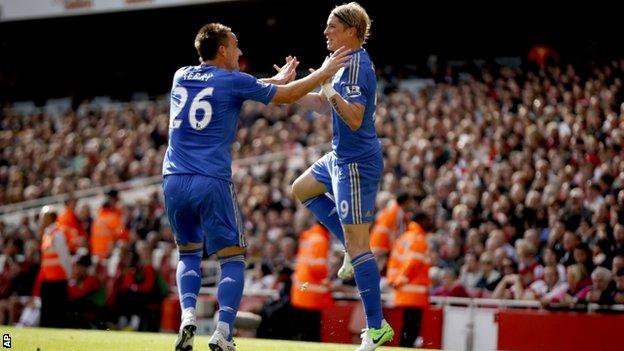 Chelsea stayed top of the Premier League table after inflicting Arsenal's first defeat of the season at Emirates Stadium.

Chelsea captain John Terry started as he decides whether to appeal

And he played his part in a victory that was set up by Fernando Torres's clever early strike as he stole in behind Laurent Koscielny to steer in Juan Mata's free-kick.

Gervinho's powerful finish put Arsenal level before the interval but Roberto Di Matteo's side claimed the points early in the second half when Mata's long-range free-kick took the slightest touch off Koscielny and beat Vito Mannone before he could react.

Arsenal manager Arsene Wenger regarded this match of a measure of his side's title potential - and they had the opportunity to rescue a point only to find Chelsea keeper Petr Cech in defiant mood.

He saved brilliantly from Lukas Podolski's second-half header and produced a superb reflex save from Olivier Giroud's deflected shot, the France striker also missing a great stoppage-time opportunity when he hit the side-netting after evading Cech's challenge.

Fernando Torres' early strike was his 75th goal in the Premier League. Only Wayne Rooney and Robin van Persie have scored more since Torres got his first in 2007.

The Blues will see this as a landmark win as Di Matteo continues to shift the emphasis in personnel and tactical approach after May's Champions League triumph.

He demonstrated attacking intent by field Oscar, Mata and Eden Hazard from the start - a selection that restricted Frank Lampard to a place on the bench.

Inevitably, Terry's every touch was jeered by Arsenal fans as was that of former Gunners defender Ashley Cole - six years after his move to Chelsea.

It was the visitors, however, who settled better and took the lead after 20 minutes through a goal that was a combination of dreadful Arsenal defending and the opportunism of Torres, who easily escaped the flimsy attentions of Koscielny at the far post to hook his finish past Mannone.

Torres should have doubled his side's lead soon after when he raced clear with only the keeper to beat but he hesitated and could only manage a fresh air shot under challenge from Koscielny, with his subsequent appeals for a penalty ignored.

The home side's rhythm had not been helped by the early loss of Abou Diaby with a hip injury but they forced their way back into the game with Gervinho's equaliser three minutes before the break.

The striker collected substitute Alex Oxlade-Chamberlain's cross and punished Terry for retreating too far towards his own goal with a fine finish high past Cech.

"What a miss it was by Giroud. He had an open goal. I appreciate nobody does it on purpose but that was a very bad miss."

Arsenal's improved defensive work under Wenger's new assistant Steve Bould has drawn much praise this season but once again they were sloppy as Chelsea regained the lead after 53 minutes.

Thomas Vermaelen was penalised for fouling Torres and the punishment was complete as Mata's angled free-kick took a slight touch off Koscielny to drift beyond Mannone into the bottom corner.

Cech had not been overworked in the first half but excelled in clawing away Podolski's header and then saving from Giroud's deflected effort after he had replaced the Germany striker.

Chelsea threatened on the break without testing Mannone but the best chance fell to Giroud in injury time, the France striker rounding Cech but hitting the side-netting from a tight angle.

It was the final act and Terry celebrated by advancing towards celebrating Chelsea fans after the final whistle and handing his boots to a youngster in the crowd.