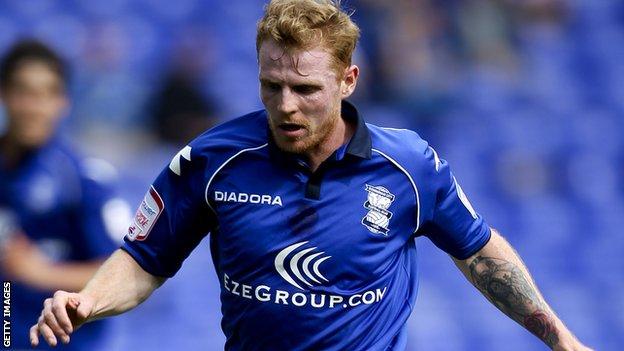 Blues boss Lee Clark was undoubtedly looking for a positive response from his side following their 5-0 defeat at Barnsley last time out.

He got just that as Burke's 25-yard strike in the 27th minute was enough to give the visitors all three points.

Despite the defeat, Brighton remain top of the table on goal difference.

Brighton had won their last five games in the Championship, but were sluggish from the outset against Birmingham.

The first chance of the game came in the 23rd minute as Stephen Dobbie's half volley from just outside the area flew past Jack Butland's left-hand post.

Brighton improved after the break but still struggled to carve out a clear-cut chance.

Dean Hammond failed to make a meaningful connection with a Dobbie cross when well placed, while a David Lopez free kick was headed away by the Birmingham defence.

Five minutes of stoppage time was shown at the end of the 90 minutes but Brighton could not break down a resolute Birmingham defence and suffered their first home defeat of the season.

"You have to give credit to the way they defended. They were more compact and more solid, we had so many chances to create something, that we didn't, and we only have ourselves to blame.

"The problem was they scored first, so it was always a hurry and looking for that special something and we didn't have.

"We need special players to produce and offensive players to give something special and they tried hard but we didn't produce."

"The goal was worthy of winning any game. "Everyone was hurting last weekend as we didn't perform to the demands made, but the players to a man have responded magnificently.

"It was an awful 72 hours but we needed a game plan coming to a place like Brighton and we simply couldn't dwell on the Barnsley game.

"There is a lot of ability in the Brighton team and they have several potential match winners and in my opinion they are right on the verge of progressing to the next level."