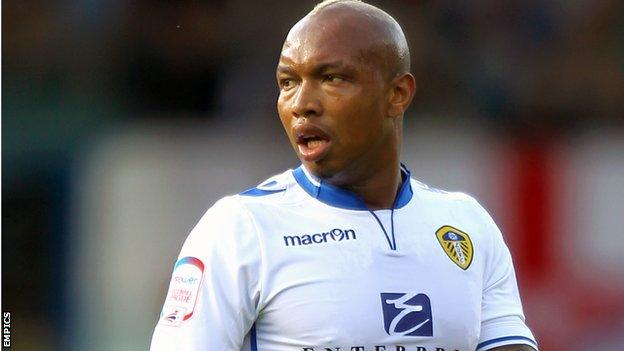 Rodolph Austin headed against the home side's woodwork before Diouf steered in a low Sam Byram cross for the opener.

Albert Adomah's header from a Richard Foster cross levelled matters only for Luciano Becchio's good work to allow Diouf to lash Leeds back in front.

Michael Tonge's powerful shot extended the visitors' advantage and, despite an Austin own goal from Adomah's corner, Leeds held on for the victory.

Senegalese striker Diouf was inspirational when Leeds upset Premier League side Everton in the Capital One Cup in midweek and again proved the key for his side.

City were left to rue on-loan Wolves defender George Elokobi being ruled out for the season after fracturing and dislocating his ankle on his debut.

Elokobi was carried off on a stretcher just before half-time when both side's had failed to make the most of their chances in the opening period.

The breakthrough came just after the hour mark when Byram found Diouf, although City fought back to quickly level when Adomah flung himself to Foster's cross and headed in.

Leeds maintained their pressure and gave themselves a two-goal cushion with efforts from Diouf and Tonge, who gave keeper Tom Heaton no chance with his 25-yard strike.

Austin's own goal gave Leeds a minor cause for concern before the final whistle confirmed a fourth league win of the season.

Leeds manager Neil Warnock: "What a fantastic week. To beat Forest, Everton and Bristol City over such a short space of time with seven players out injured is tremendous.

"We passed the ball too much in the first half and I always felt we could step up a gear.

"I think we are still some way away from having Premier League potential. At this level you are judged on the strength of your bench and we have been bringing on first year professionals.

"But I can't praise the lads enough. I named pretty much the same team as played against Everton and that was a really tough game so to come up with another victory did them great credit."

Bristol City manager Derek McInnes: "George has a shocking injury with a break and dislocation to an ankle. I am so sorry for the lad because his season is over.

"We keep slitting our own throats with defensive errors and you can't always score a boatload of goals to win games.

"I'm annoyed because I keep having to stand here and make the same comments.

"It's my responsibility to make us defend better and that was why I brought George in.

"Now I have to look at the left-back position again. We also lost substitute Joe Bryan with concussion so it is a big problem."