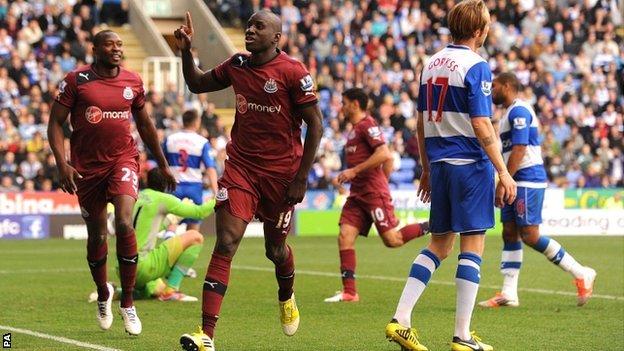 Demba Ba scored twice to rescue a point for Newcastle and deny Reading their first Premier League win of the season.

In a match that only came to life just before the hour mark, Jimmy Kebe tucked in Jobi McAnuff's threaded pass.

Ba equalised in the same minute when he volleyed in Cheick Tiote's lofted ball.

Reading took charge once again minutes later thanks to Noel Hunt's glancing header but Ba then pounced for his sixth goal in six games - although there was a suspicion of handball.

Replays showed that his strike, seven minutes from the end, came off his arm following Shane Ferguson's left-wing cross, and Reading's players were quick to protest to referee Andre Marriner.

The hosts were also left frustrated as McAnuff hit the post late on with a curling strike, while Steve Harper saved Jason Roberts' effort.

A draw for the newly-promoted side might look like a decent result against a strong Newcastle team, and the point moves them off the bottom of the Premier League table.

However, Brian McDermott may look back at this game as a missed opportunity given the lethargy on show from the visitors for large parts of the game.

It continued a mixed start to the season for Alan Pardew's side, but once again they were saved by some incisive finishing from one of their star strikers, who has now scored 22 goals in 40 Premier League games for the Magpies.

Having declared that the sole remit of his new eight-year contract was to win every week, Pardew might have cause for concern after this encounter and certainly would have been less than impressed by his team's slow start.

Without the guile of the ill Yohan Cabaye in midfield, the visitors struggled to retain the ball and it was not until Reading eked out the first real chance of the game on the half hour that they responded.

By that stage McDermott's side looked the more fluent of the two teams and, when Pavel Pogrebnyak headed McAnuff's cross towards the top corner, Harper did well to tip it over with his left hand.

On Pardew's return to his former club, and having given McDermott his first job at Reading, there was more than a feel of a friendly fixture.

That soon changed just before the hour mark when, in complete contrast to the previous inaction, three goals arrived in less than five minutes.

And it coincided with a reshuffle in the Newcastle defence as Steven Taylor was replaced by James Tavernier.

Reading skipper McAnuff was the creator on both occasions for Reading as he found the onrushing Kebe, who, on his first Premier League start of the season, cut inside to receive the ball and squeezed his shot inside the near post.

Amazingly, the lead lasted less than a minute as Ba continued his superb scoring run by expertly taking Tiote's incisive pass to volley in from the edge of the area.

The goal flurry continued when McAnuff crossed from the left to find Hunt with a glancing header.

At last, Reading settled and it looked like they might hold on for victory, but Ba's controversial goal made it all square again and keeps the Royals in the bottom three.

Reading boss Brian McDermott: "I'm absolutely gutted because we deserved to win the game. When you see [Demba Ba's second goal] back [the officials] have made a massive error. It was going away from goal and the scorer has handballed it into the net. It's a blatant error.

"We played fantastically today, that is the identity of our team and we played on the front and even at 2-2 we had chances and I think Alan Pardew would have been pleased with the point."

Newcastle boss Alan Pardew: "We are struggling for rhythm this year, and are not playing with the same exuberance as last year and today was a sign of that. We can't rely on spirit all the time.

"No mistake, [Demba Ba's second goal] hit his hand. Shane Ferguson put the ball in a great area, and it hit Demba's head and hit his hand but it's about the delivery of the ball. Reading gave us a going over today, I have no worries about them staying in this division."