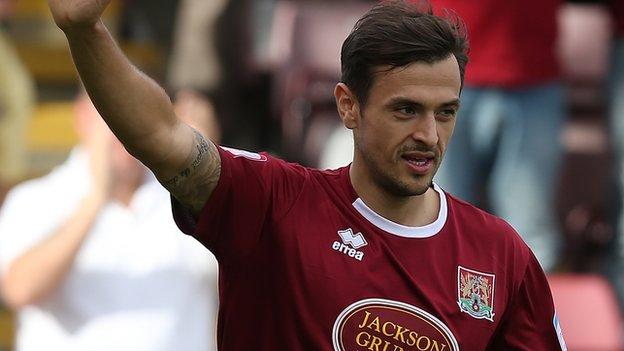 Northampton rescued a point in a thrilling draw against Burton.

Calvin Zola's shot put the hosts in front and Kelvin Langmead turned Billy Kee's cross in to his own net for 2-0.

But the Cobblers skipper made amends by heading in Ishmel Demontagnac's free-kick before David Artell's scrappy goal brought the visitors level.

Zander Diamond nodded home a Damien McCrory free-kick to put Burton back in front, but Alex Nicholls floated in a dramatic late equaliser.

"It was a bit of a roller coaster, wasn't it? I felt the first half was well controlled performance but I think when Calvin Zola came off with an injury, it was a big blow for us and it turned the game somewhat.

"I was disappointed we conceded to goals to let them back in it, but I felt we showed a lot of character to go 3-2 up.

"That's the worst half of football we've played since I've been here. This sometimes happens because on Friday in training, it was the best I've ever seen us.

"They've got character and they do fight back. My irritation is that you shouldn't need to be punched before you start punching. We gave them a 2-0 start.

"The two goals against us are five-a-side goals. They shouldn't be anywhere near our goal and should've been defended much better.

"We came back. The goal to get the draw is as good a goal as I've ever seen."