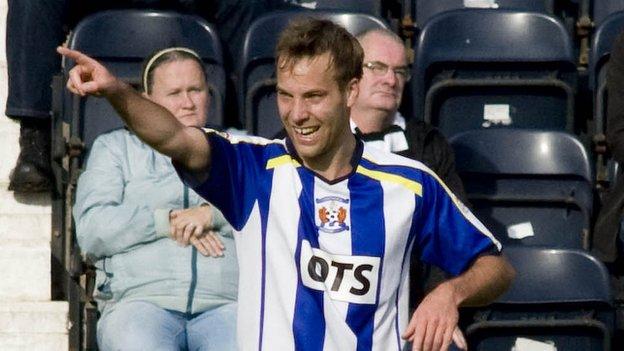 Kilmarnock manager Kenny Shiels hopes James Dayton's stunning goal against St Mirren will give the player more self-belief as the Ayrshire side seek to build on their second win of the season.

Dayton's impressive strike was Killie's third in the 3-1 win at Rugby Park, with Cillian Sheridan and James Fowler also on target.

"Dayton is unplayable at times and we need to work on his confidence and help him to believe," said Shiels

"It's important that he believes how good he is, he has so many qualities."

Shiels was pleased to see Sheridan notch his first Kilmarnock goal and also praised long-serving Fowler, who made a goal-line clearance when the hosts were 1-0 up.

"He needs to get more credit because he's been a fantastic club man and I'm delighted to work with him, he's a great role model for all the young players coming through.

"I thought the performance was very good, by both teams I would add and it's important that we acknowledge the quality of play by Kilmarnock and St Mirren, it's a really great advert for Scottish football.

"We've got to go and try and win at Hearts, we did it this last two season. Hopefully we can go and do that next week."