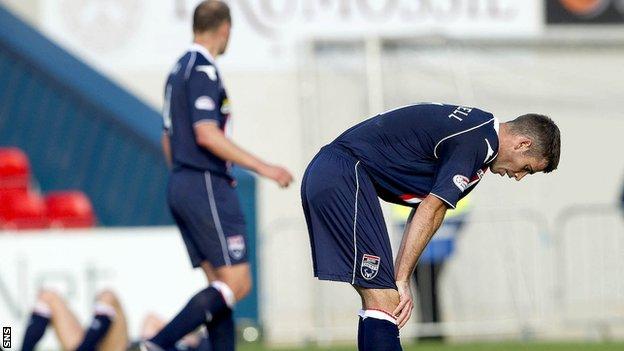 Manager Derek Adams was full of praise for his Ross County players and their 40-match unbeaten league run, which was ended by St Johnstone in Dingwall.

"I have told the lads to be very proud of what they have achieved," Adams said after the 2-1 defeat.

"It was our best performance since coming into the SPL.

"We've lost two poor goals. The first was a long-range strike and the second was poor defensively. Other than that I didn't think we deserved to lose."

Despite playing against 10 men for an hour and dominating most of the match, County lost out to a battling Saints' side who never threw the towel in.

Liam Craig gave Saints the lead against the run of play on the half hour mark and the Perth side went a player down a couple of minutes later when Rowan Vine was sent off for an off the ball incident with Richard Brittain.

County piled on the pressure in the second half and Sam Morrow hit a deserved equaliser in the 68th minute.

But with County pushing for a winner Saints grabbed a vital second in the 85th minute when Frazer Wright headed home from a corner.

"I thought we deserved to win it hands-down with the chances and possession we had," added Adams.

"When we got the goal back, I didn't see them scoring again.

"Fair play to St Johnstone - they've won the match but, overall, I thought we were the better team.

"We probably should have taken a lot of the chances we had today.

"We are disappointed, obviously, that our long unbeaten league run has ended, particularly seeing it happen in the manner it did today.

"We were against 10 men and playing so well. The way we passed it and dominated made it our best SPL performance so far."