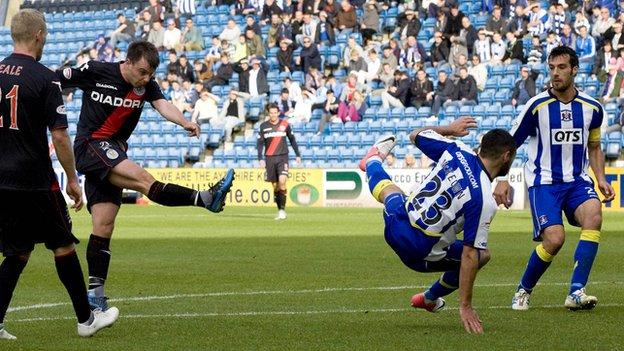 St Mirren manager Danny Lennon was frustrated his side were unable to capitalise on their first-half dominance against Kilmarnock.

Lewis Guy could not beat goalkeeper Kyle Letheren when through on goal twice in the first half.

And Paul Dummett had an effort cleared off the line after Killie went a goal up, with the hosts going on to win 3-1.

"What Kilmarnock did that we certainly didn't was take their chances," Lennon told BBC Radio Scotland.

"We created enough, more so in the first half. The only thing that we didn't have was an end product."

Guy also hit the crossbar after Killie went 3-0 up and Paul McGowan struck a late consolation for the visitors.

"Last week [against Hearts] we got two opportunities and we took two of them," added Lennon.

"Today we had quite a few and only took one.

"All credit to Kilmarnock, they took their opportunities when it counted."