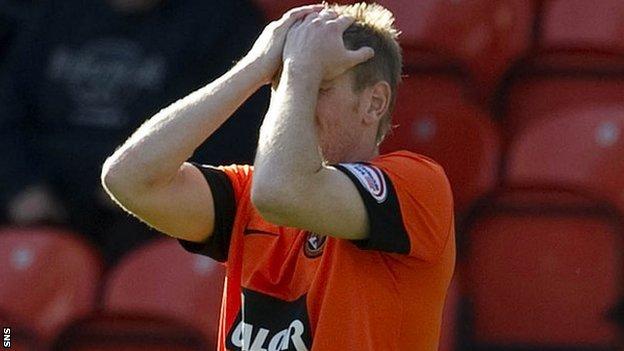 Peter Houston thinks his Dundee United side must show more fight against Queen of the South or suffer a defeat like the one inflicted by Hearts.

"We were bullied all over the pitch by a decent Hearts side," the United manager told BBC Scotland after the 3-0 home defeat ahead of Tuesday's Scottish Communities League Cup tie.

"It is a test of character now.

"We go to Dumfries against a side that beat Hibs in the cup and beat Rangers in the Ramsdens Cup as well."

Houston is wary of the Second Division leaders, who were winning 3-0 away to Brechin City as United were heading for defeat in the Scottish Premier League at Tannadice.

"They have done exceptionally well, a team that work very hard, have good young players and good legs about the team," said the United boss.

"We will need to go down there and battle, something we didn't do as well as Hearts, apart from Willo Flood, who many people don't think wins tackles.

"Willo Flood won most of his tackles, and maybe at times gave the ball away, but he worked his socks off and I'm needing more players like that in the team."

Houston is hopeful that captain Jon Daly will be able to start at Palmerston Park having only been considered fit enough for the bench for what the manager describes as a fully-stretched squad against Hearts.

"There's bone swelling and it's still not settled down yet, but he felt he had 20 minutes or so," said Houston of the striker who is recovering from injury.

"But, in the end, he was given about 30 as it was desperation stuff.

"We've still got good young players and have to work hard to turn it round again."

Houston believes that the result might have been different had a penalty kick been awarded when Flood went down between Ryan Stevenson and Darren Barr.

"I thought we should have had a stonewall penalty kick when Willo Flood was brought down before they scored their first goal," he said.

"But, once they got their two goals, it is a mountain to climb against a good, physical, strong side with a couple of good young players.

"I think goals change games. But, first and foremost, we were beaten comprehensively in the end."