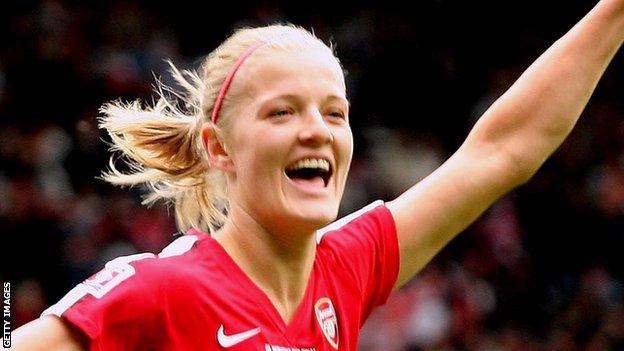 They cannot be overtaken on points but Birmingham, who beat Doncaster Belles, could pip them on goal difference.

The Gunners need only a point from their game against the Belles next week to make sure of retaining the title.

Everton's chances of finishing second took a knock when they lost at Lincoln, while Chelsea won at Bristol Academy.

The Gunners beat the bottom-of-the-table team by a convincing margin but needed two goals in the last few minutes to kill off their hard-working opponents.

It looked plain sailing when the home side struck twice in four first-half minutes.

Midfielder Chapman headed home from a Rachel Yankey corner then drove in her second goal after latching onto White's 22nd-minute pass.

Left-winger Yankey and midfielder Jordan Nobbs both struck the woodwork as Arsenal went for a killer third goal before the interval.

But Liverpool forced their way back into the game after the break and in the 66th minute striker Katie Brusell reduced the arrears with an excellent 20-yard shot.

The three points were heading Arsenal's way, however, when White turned a Kim Little cross over the line in the 88th minute.

And as the game moved into stoppage time the striker doubled her tally with a cool finish from Chapman's pass.

First-half pressure from Birmingham was rewarded when winger Eni Aluko opened the scoring with a 15-yard shot from striker Jodie Taylor's 24th-minute pass.

Jade Moore added the visitors' second goal 10 minutes after the interval, the midfielder turning in a Kerys Harrop cross.

Aluko should have increased the lead but shot over the bar when through on goal, then Taylor sent a good effort just wide as Blues looked for a victory clincher.

They saw the game out with ease though, moving ahead of Everton into second place and in pole position to finish the season as runners-up at least.

Lincoln dominated the early stages and only a fine save from goalkeeper Rachel Brown prevented striker Precious Hamilton from giving the home side the lead.

But the Imps went ahead through an own goal in the 22nd minute, central defender Lindsey Johnson heading past her own keeper following a Jess Clarke cross.

A tremendous 30-yard strike by midfielder Lucy Staniforth gave the home side their second goal eight minutes before half-time.

Lincoln maintained their grip until the closing stages, but six minutes from time midfielder Fara Williams pulled a goal back.

That led to some anxious moments for the home defence before the final whistle signalled a deserved win to end a three-match losing streak.

Recently appointed Chelsea manager Emma Hayes celebrated her first victory after midfielder Dani Buet had gone from hero to villain as the Blues finished with 10 players.

Buet scored the only goal of the game with just five minutes on the clock, tucking home a penalty following a foul on Spanish striker Adriana by defender Jemma Rose.

But the Blues midfielder was sent off in the 55th minute after receiving two bookings, both of them for fouls on Adriana's compatriot and fellow striker Laura del Rio.

Goalkeeper Carly Telford had to make a string of fine saves as the Chelsea 10 fought a rearguard action, but they held on to draw level on points with Bristol.