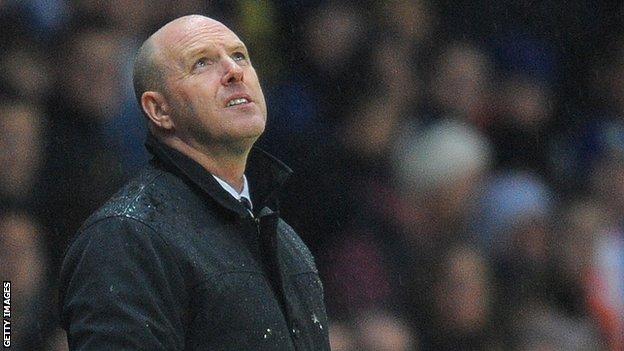 Talks over the future of Blackburn manager Steve Kean are expected to continue through to Tuesday.

The Rovers boss is understood to be on the brink of the sack.

Owners Venky's have been in discussion about Kean's position since Saturday, despite the club being in an automatic promotion place in the Championship.

He could yet be offered another role at the club but if he exits Ewood Park, assistant Eric Black is expected to be offered the job of caretaker boss.

Kean, who replaced Sam Allardyce as Blackburn manager in December 2010, has been under pressure throughout his tenure, with large sections of the support calling for his dismissal.

After managing to stay in the Premier League on the final day in 2011, Rovers were relegated to the Championship in May this year.

Despite Blackburn sitting second in the table after seven matches, supporters have continued to chant for his removal and he faced high levels of abuse in the 2-1 defeat to Middlesbrough on Friday.

Having come through a series of difficult moments, the 44-year-old is understood to be hopeful that he can persuade the owners he is still the right man to take the club forward.

Blackburn refused to comment on the situation on Sunday.

Speaking to BBC Radio Lancashire after Friday's first league defeat of the season, Kean remained confident his team are on course for promotion back to the top flight at the first attempt.

"I'm disappointed [with the defeat] but we're in a position where we're, on average, picking up two points per game," he said.

"If we can do that for the whole season, that will see us getting promoted and that's the one goal we've got."