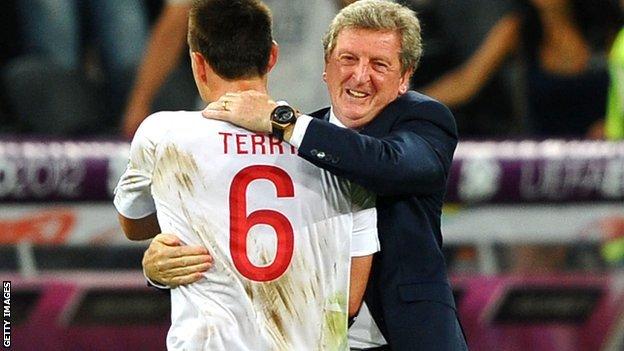 England manager Roy Hodgson says he is "disappointed" to learn of John Terry's international retirement but "reluctantly" accepts his decision.

Centre-half Terry played in all four of England's matches at Euro 2012 and featured in the World Cup qualifying win over Moldova this month.

But he claims his place in the England team is now "untenable" following the Football Association's decision to "pursue charges" against him despite being cleared in court of racially abusing Anton Ferdinand.

"I am of course disappointed to lose a player of John's international experience and exceptional ability," said Hodgson.

"I have enjoyed a good relationship with John during my time as England manager and I reluctantly accept his decision.

"He had the courtesy to call me prior to announcing his retirement."

In a statement, the FA added: "Following his announcement that he is retiring from the England team, the FA would like to thank John Terry for all of his efforts with the national team over the past decade. During his 78 appearances, John has always given his full commitment to the team."

Terry retired from international football on Sunday, on the eve of a FA hearing into allegations that he used "abusive and/or insulting words and/or behaviour" towards QPR defender Ferdinand in a Premier League game 11 months ago.

The 31-year-old Chelsea centre-half had already been cleared at a high-profile court case at Westminster Magistrates' Court, but the FA decided to hold its own inquiry.

Terry's last appearance for England came on 7 September, when he played in a 5-0 World Cup qualifier victory over Moldova.

He had already been stripped of the England team captaincy as a result of the charges but played in every England game at the European Championships in Poland and Ukraine.

Arsenal and England winger Theo Walcott, 23, thanked Terry for his help during his international career.

"JT has been fantastic to me, looked after me, been a great professional," he told BBC Sport. "I have just got to wish him good luck and respect his decision. It's sad obviously but it's his decision, and I have some great memories with him.

"I didn't have a clue [Terry's decision to retire was coming]."

Hodgson also asserted as recently as a month ago that he intended to include Terry in future England squads.

Former England captain Gary Lineker believes Terry has made the right move and praised his performances in an England shirt.

"Whatever you think about John Terry, he always gave his absolute all on the field for England," Lineker tweeted. "A strong leader and great defender."

FA general secretary Alex Horne has rejected Terry's claims the FA had made his place in the England team "untenable".

"It's a personal decision. I don't see how we've made it untenable," Horne told Sky Sports News.

Jimmy Armfield, another former England captain, thinks Terry's retirement will be a blow to Hodgson.

Armfield told BBC Radio 5 live: "I was surprised to hear the news. It has come at a pretty difficult time for Roy Hodgson.

"We are in the middle of the World Cup qualifiers and I think he needs all the good players he has got."

He said: "I just know for the manager of England, it's a blow because he is a great player and the pool isn't great for English players at the moment and the team.

"That's the tough end for us, but that is a personal decision John has made."

"Regardless of what else has gone on, he has been outstanding for England on the pitch and as a leader," said Lawrenson.

"He gives you everything, not just on the pitch but in the dressing room as well and they will miss him."

Former FA chief executive Mark Palios said he was disappointed with Terry's decision, but believes the void will be filled quickly.

"A lot of players will be sad to see him go, but there is one thing that happens in football and that is the graveyard is full of indispensable men," said Palios. "Another player will come along and fill the place."