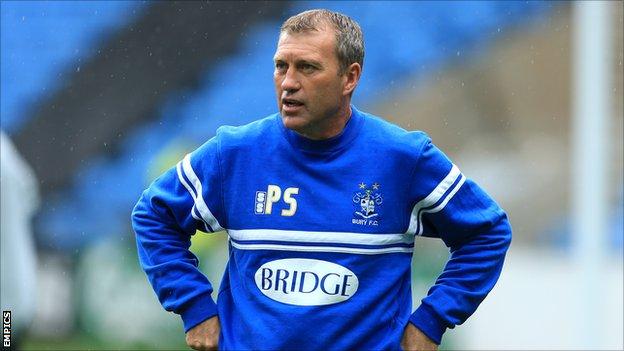 Peter Shirtliff is keen to remain at Bury, despite being overlooked for the managerial vacancy at Gigg Lane.

Shirtliff has been caretaker manager since Richie Barker's departure to Crawley last month, but the Shakers have yet to win a match under him.

Bury hope to appoint a new manager from their shortlist of five candidates before Saturday's game at Stevenage.

"I want to stay at the club and work with the team," the 51-year-old told BBC Radio Manchester.

The board have supported me and I'm grateful for that, but sooner or later they've got to make a decision

The Shakers lie bottom of League One with three points from eight matches, but the board of directors have said they want Shirtliff and development coach Ben Futcher to work alongside whoever they appoint as their new manager.

"I'm a pretty amiable guy. I'm not confrontational, but I tell it how it is.

"The board have supported me and I'm grateful for that. But sooner or later they've got to make a decision. The time's obviously right, they're interviewing for a new manager and rightly so.

"It needs a shake up. Whether we can get bodies in, I'm not sure. We'll have to see about that, but it needs a few changes I think.

"We've had situations in previous games where we should have got more points. We've not converted chances and we've given goals away.

"When you do that, it's difficult to win games because you don't have a solid base to start from."