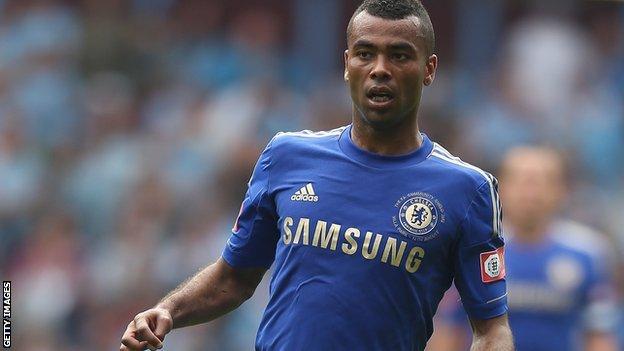 Chelsea manager Roberto Di Matteo says he is "very optimistic" Ashley Cole will sign a new contract at the club.

The England left-back, 31, only has 10 months left on his deal and could sign a pre-contract agreement with a rival club in January.

But Chelsea manager Di Matteo expects Cole's future to be resolved before the end of the year.

"I'm very optimistic that it will be dealt with before that," Di Matteo said.

"He's one of the best left-backs in the world."

Cole joined Chelsea from Arsenal in the summer of 2006 in a part-exchange deal that saw the Blues pay £5m and send William Gallas to the Gunners.

Cole has struggled with an ankle injury recently, but Di Matteo maintains he is still fit enough to warrant a new contract.

He said: "He's physically very good, very strong and has the ability to recover very quickly from game to game. He offers us a lot on that left-hand side.

"He's a fantastic pro, which I'm not sure whether you know.

"He's somebody that's the first one out in training, one of the first into the building with John Terry and trains every day like a professional. He is reliable, somebody that you could go to war with.

"And he's a very quiet guy as well. He's very private at his own stuff."

Cole scored his first goal for his club in 28 months in the 1-0 defeat of Stoke on Saturday to keep Chelsea top of the Premier League.