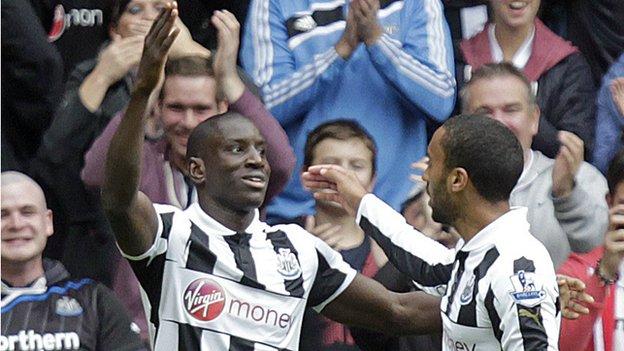 Senegal striker Demba Ba scored his third goal in two games to earn Newcastle a 1-0 victory over Norwich. After scoring twice after coming on as a substitute against Everton the previous Monday, and he marked his return to the starting line-up by converting Hatem Ben Arfa's defence-splitting pass. Ba's compatriot and club-mate Papiss Cisse missed a first-half penalty.

Everton scored a controversial opener when Nigerian forward Victor Anichebe volleyed home after a suspicion of handball from Marouane Fellaini in the build-up. The Toffees went on to beat Swansea 3-0.

Ivorian Arouna Kone scored his second goal for Wigan since joining them in the summer, but the 90th-minute strike proved little consolation as his side went down 2-1 at Fulham.

What a debut it was for the Nigeria striker Obafemi Martins, who scored the winner for Levante against Real Sociedad with three minutes remaining. Martins had come on as a substitute at the start of the second half with Levante survive at home as they were a goal down from the 23rd minute but two goals in the last 20 minutes gave them a 2-1 win over Sociedad.

Martins' debut had the makings of a Hollywood style revival as he battles to resurrect his career after an unsuccessful stint at the Russian side Rubin Kazan. Martins also previously played for Inter Milan, Wolfsburg and Newcastle United.

Abdelaziz Barrada was on target for the third time in five games after scoring at the weekend for Getafe. But despite his 59th-minute equaliser the Moroccan striker' s side lost 2-1 away at Celta Vigo and finished the game with 10 men. Getafe missed the chance to amass seven points and they now lie in 15th position.

Africans are on fire in the Super League as the race for the title heats up. There are five weekend of games left to wrap up the season with Italian coach Marcelo Lippi's Guangzhou Evergrande leading the table with a four-point margin.

Ivory Coast's Didier Drogba took his tally to six after giving Shanghai Shenhua the lead in the 1-1 draw at Shanghai Shenxin. Shenhua and Drogba have no hopes of winning the title as they are 20 points adrift and lie in eighth position.

And Zambia captain Christopher Katongo sealed victory for Henana Jianye in the 89th minute as they came from behind to beat Guangzhou R&F 3-1. Jianye, meanwhile, are still in the relegation zone, and the victory only lifted them from the bottom of the table.

Souleymane Camara salvaged a 1-1 home draw for league holders Montpellier thanks to his second-half equaliser. The Senegal striker scored in the 70th minute, just before he was substituted, to cancel out Pierre Aubameyang's goal for Saint Etienne in added time of the first-half. It was the Gabon striker Aubameyang's fourth goal in six games for mid-table Saint Etienne. Montpellier are still in the bottom of the table in 16th position and seem to be struggling to repeat last season's league winning form.

Ivory Coast midfielder Tape Doubai found the back of the net for Sochaux who beat bottom side Troyes 3-1. It was the Ivorian's third goal in six games for Sochaux who have climbed to 14th position.

Brest edged out 10-man Valenciennes 2-1 at home with Togo striker Johnathan Ayite equalising for them in the 62nd minute with a left-foot half-volley. It was Ayitey's second goal in two matches for Brest, who moved to eighth position with their third win in six games.

Johnathan Pitroipa was on target for Rennes, who failed in their attempt to rise up the table from the bottom three after drawing 2-2 away at Toulouse. The Burkinabe striker has taken his goal tally to three in six games.

Senegal midfielder Ricardo Faty scored in the 64th minute as his side Ajaccio drew 2-2 with Bordeaux.

Morocco striker Younes Mokhtar celebrated his first goal this season after putting PEC Zwolle ahead in the first-half, but his side lost control of the game against Groningen in the last 10 minutes, conceding twice to lose 2-1.

Ivory Coast striker Wilfried Bony blasted from the penalty spot to equalise for Vitesse Arnhem who lost their one hundred percent record in the 1-1 home draw with Heracles. Bony is currently the second top scorer with four goals after six games.

Ghana's David Addy opened his tally for the season with a 59th-minute goal for Vitoria Guimaraes, who snatched a lone goal win away at 10-man Moreirense.

Albert Meyong made no mistake from the penalty spot as the Cameroon striker secured the lone goal win over Olhanense for Vitoria Setubal in the 47th minute. Olhanense were down to 10 men in the 35th minute after Cape Verde's Elvis 'Babanco' Macedo was sent off following a second yellow card.

Guinea Bissau striker Cicero Semedo salvaged a point for Pacos de Ferreira with an equaliser in added time as his side drew 3-3 at Nacional. Angola striker Mateus da Costa had scored the second goal for Nacional.

Ten-man Academica took the lead through a penalty by Guinea striker Salim Cisse as his side drew 2-2 with giants Benfica.

Nigeria striker Imoh Ezekiel was sent-off at the start of the second-half as Standard Liege suffered their third straight defeat and this time they were 2-1 losers at home to visiting Gent, despite taking the lead.

Also sent off was defender Landry Mulemo who marched out after a second bookable offence as his side Kortrijk lost 2-1 away at Beerschot. The Congo Democratic Republic international was the first player in his side to be sent-off in the game as they finished with nine men to lose their second game of the season.

Boubacar Dialiba Diabang finally discovered his scoring boots after five games to score a goal in each half for Mechelen who outclassed Mons 3-0.

It was a good weekend for Nigerian strikers of the three Moscow clubs as they recorded a hat-trick of wins both at home and away.

CSKA Moscow came from two goals down to pull off a dramatic late win away at Volga thanks to their Nigerian sensation Ahmed Musa who secured the points in the 87th minute. It was Musa's third goal in eight games for the Moscow giants.

Fellow Nigeria striker Victor Obinna came on as a substitute in the 57th minute to score his first goal of the season and help another Moscow side Lokomotiv to a 3-0 victory away at Terek Grozny. Obinna found the back of the net in the 83rd minute as Lokomotiv move to second position and with two points behind the leaders and city rivals CSKA.

The only Moscow side playing at home over the weekend, Spartak, secured a 3-1 win over Rostov with Nigeria striker Emmanuel Emenike scoring a goal in each half. It was Spartak's second win in the last five games and they lie in sixth position.

Following his hat-trick the previous weekend, Pierre Webo was on target again on Saturday, giving Istanbul BB a 60th-minute lead against Orduspor. The Cameroon striker took his tally to five goals in as many games despite his side playing with 10 men for the last 70 minutes of the game. But Orduspor hit a late equaliser, and a share of the points meant Istanbul BB dropped pout of the top three to fifth.

Ghana midfielder Kevin-Prince Boateng was sent off with eight minutes remaining as nine-man AC Milan succumbed to their third defeat in four games by losing 2-1 away at Udinese.