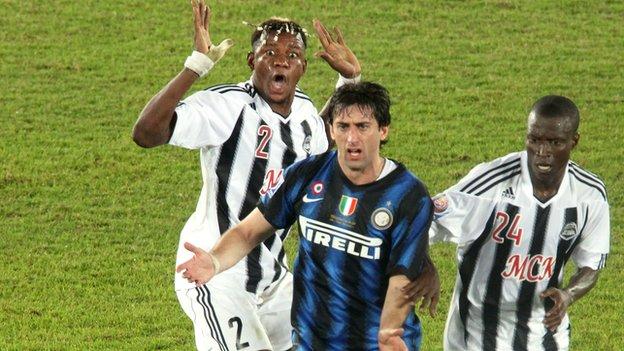 Fifa has made the draw for December's Club World Cup in Japan.

They will face the victors of a play-off between the winners of Japan's football championship and New Zealand's Auckland City on 9 December.

And the winners of that match will face South American champions Corinthians for a place in the the final.

In the other half of the draw, Mexican side Monterrey and the winners of the Asian Champions League will meet with a semi-final berth at stake.

The victors will face English Premier League side and European Champions League winners Chelsea to decide who makes it to the final, which will be played on 16 December.

Africa's Champions League is at the semi-final stage, with Congolese side TP Mazembe up against Esperance of Tunisia and Nigeria's Sunshine Stars going head-to-head with Al Ahly of Egypt.

The two-legged ties will be played in October, with the first matches held between 5-7 October and the return games scheduled for 19-21 October.

TP Mazembe are former finalists of the Club World Cup, reaching the showpiece match in 2010 when they were beaten by 3-0 Inter Milan (pictured). They remain the only African side to have made it that far in the tournament.

However, Al Ahly have also enjoyed a degree of success, finishing third in 2006.

Esperance, should they make it, will want to perform better than they did last year when they lost their quarter-final and the fifth-placed play-off to end up in last spot.

Next year's tournament will be held in Africa for the first time, with Morocco the hosts.