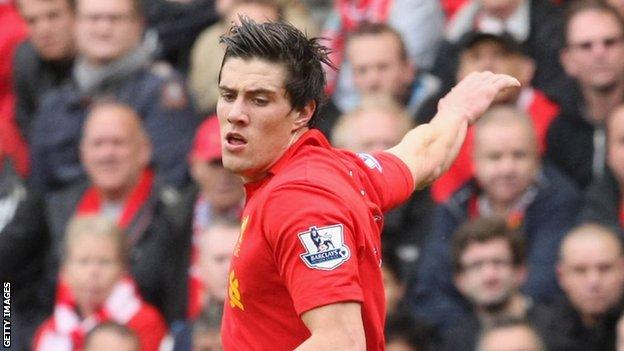 Liverpool's Martin Kelly will be out of action for at least six months and will require surgery on a knee injury.

The 22-year-old England international ruptured his anterior cruciate ligament (ACL) in the closing stages of the 2-1 defeat by Manchester United on Sunday.

A club statement said the academy product will be ruled out for a "significant period of time".

Kelly told his Twitter followers: "It's not the worst injury I've had and I'll be fighting for my place next year."

Liverpool career: Made debut in 2008 before joining Huddersfield on loan. Injuries disrupted 2009-10 season and missed most of the second half of 2010-11 campaign with hamstring problem.

England: Made debut for the senior team in the friendly against Norway in May after he replaced the injured Gary Cahill in the Euro 2012 squad.

The full-back had a scan on Monday morning and vowed to come back "fitter and stronger".

Liverpool said Kelly would require "ACL reconstruction", meaning the right-back, called up into the England squad for Euro 2012, will be unavailable for at least six months.

He has made 54 appearances for the club since his debut against PSV in the Champions League in 2008 but the Whiston-born defender's career has been hampered by injury.

He did not play for almost two years while at the Liverpool Academy because of a back problem, and hamstring and groin injuries have blighted his senior career.

But he had featured regularly this season for Brendan Rodgers, playing at full-back in four of their five Premier League games.

There was better news on Daniel Agger as the central defender did not, as had been feared, suffer ligament damage during Sunday's defeat.

The Denmark international was carried off on stretcher in the second half of the loss to United after colliding with team-mate Glen Johnson.

What is a cruciate ligament?

"No ligament damage was sustained but further tests will be carried out before it can be established when he will be able to return to training," Liverpool said.

Forward Fabio Borini is another injury concern after the £11m summer signing was replaced at half-time because of a bruised foot and a swollen ankle.

"The club's medical staff will wait for the swelling to reduce before an MRI scan can take place tomorrow [Tuesday] to assess any soft tissue damage and determine when he may be able to return to playing," added the club.