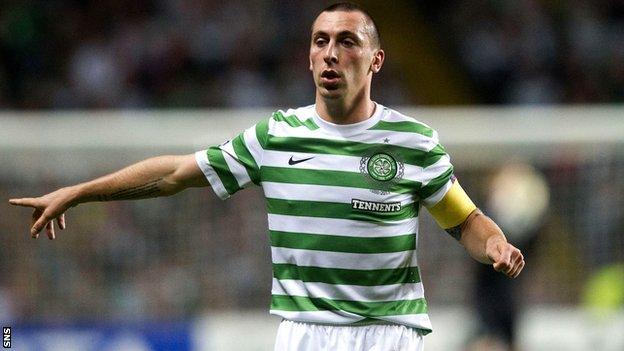 The 27-year-old missed Scotland's opening two World Cup qualifiers with an ongoing hip injury but has featured in his club's last three matches.

"He won't play against Raith Rovers as we think it's an opportunity to give him a free week," explained Lennon.

"But we're trying to base his schedule round playing for us and Scotland."

Scotland face away trips to Wales and Belgium in October, following home draws against Serbia and Macedonia in the Brazil 2014 qualifying campaign.

"Scott will want to play in these games Scotland have," added Lennon.

I think you are seeing the best of Scott Brown now. He has set himself a very high standard but there is more to come.

"He wanted to play in the last round of games but he just couldn't manage it.

"Obviously, Celtic come first in my priorities but I know Scotland have two particularly big games coming up.

"I know Scott will want to play in both of them, we just hope we can manage him over that period to be able to play."

Brown was rested for domestic games at the beginning of the season in order to make sure he was fit for Celtic's Champions League qualifiers.

And, having reached the group stage of the tournament, the midfielder was a stand-out performer in the opening match against Benfica last week.

"He's a fantastic athlete," enthused Lennon. "He's one of the best I've seen in terms of getting around the pitch.

"His attitude has been magnificent since I've come in and his form at the minute is no surprise to me.

"He has shown great maturity and quality and he has been a real driving force for us.

"I think you are seeing the best of Scott Brown now. He has set himself a very high standard but there is more to come. He's coming into his peak and that's great news for us and Scotland as well.

"At any club you need a bit of time to find your feet, particularly one the size of Celtic. Certainly since I've taken over, two-and-a-half years ago, he has been a model of consistency."