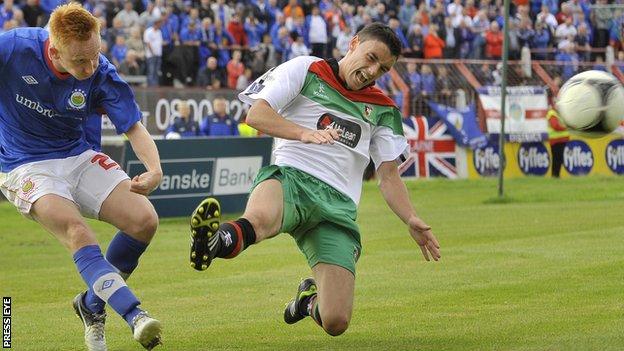 Two of Tuesday's County Antrim Shield quarter-finals have been postponed because of waterlogged pitches.

The Belfast derby between Glentoran and Linfield and Donegal Celtic's game with Lisburn Distillery have been rearranged for Monday, 1 October.

Ballymena United have reported that their game against holders Cliftonville will definitely go ahead as planned.

The other match sees Crusaders face Championship side Bangor on the artificial surface at Seaview.

Crusaders are without Chris Morrow and David McMaster for their game against Championship side Bangor at Seaview.

Morrow has suffered a calf muscle injury while McMaster has sustained a hamstring pull.

Ballymena boss Glenn Ferguson says his team must improve if they are to overcome Cliftonville at the Showgrounds.

"We must up our game a lot and put right our poor showing against Coleraine in the league on Saturday," said the United boss.

Skipper Allan Jenkins is a long-term absentee for the Sky Blues after suffering an injury in the 4-1 defeat by the Bannsiders at Ballycastle Road.