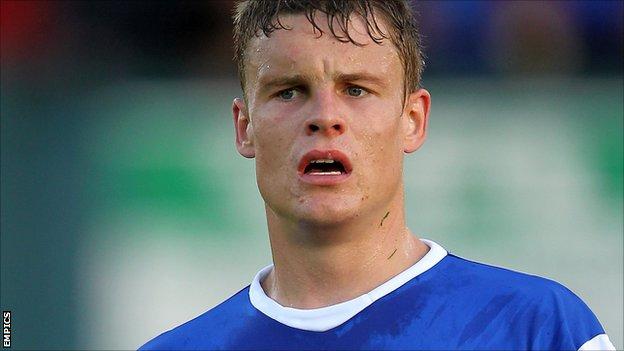 Former non-league striker Matt Smith has said he has had to adapt his own game to fit into the passing style of play employed by Oldham Athletic.

The 6ft 6in front man, who joined from Solihull Moors in May 2011, netted his second goal of the season in the

Smith told BBC Radio Manchester: "It's something I've been learning a lot about here - how to play on the floor.

"I wasn't used to it coming from non-league, where it was quite route one."

The 23-year-old continued: "I was always in and amongst the action because of my size and presence.

"I continue to play the manager [Paul Dickov] wants to play and that's free-flowing football. We've got fantastic wingers so I just get into the box as much as I can and get on the end of things.

"I am adapting and it's good for me to quicken up my feet. You have to adapt with any team you play in and I'm seeing a lot of benefits to my game."

Smith appeared to be drifting away from professional football after being released by Cheltenham Town at the age of 18.

Spells in non-league with Redditch United, Droylsden and Solihull Moors followed, while he also gained a degree in International Management with American Studies from the University of Manchester, which included a year studying in the United States.

Dickov offered Smith a route back into full-time football at Boundary Park last summer and the Birmingham-born striker has no regrets about his decision.

"It just goes to show how non-league is a good stepping stone for a lot of players to get into the League," said Smith.

"Coming into full-time football is a huge adaptation from being a full-time student, where it's not really the healthiest of lifestyles.

"I've been in the game for a season and I love every part of being a professional footballer."