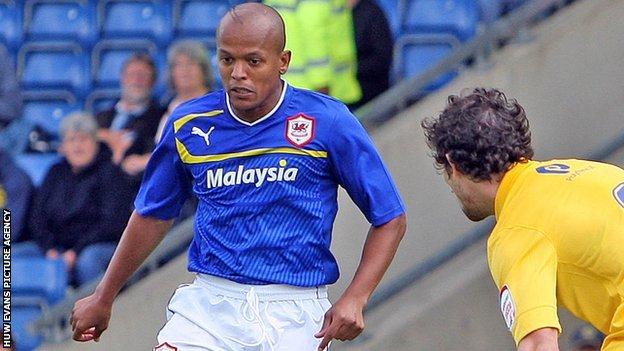 Rob Earnshaw believes he will return to Cardiff City a better player after his loan spell at Maccabi Tel Aviv.

The 31-year-old Wales striker has joined the Israeli club until the end of the season.

"I've got no doubt that this is going to make me a better player and understand the game more," he said.

"I've not come here just to play football, I've come here to learn and be better... the football is right up there tactically.

Earnshaw in July 2011 on a two-year deal after coming out of contract at Nottingham Forest, but has not featured this season after falling down the striking pecking order.

The 58-times capped international says he needs regular first-team games, but he was not prepared to pick just any club to rekindle his season.

I need to enjoy football. I need to play and it's frustrating when you don't play and you think you can make a difference

"The main thing was to play football... it was a case of getting everything on the table and seeing where the best place to play was," Earnshaw said.

"Obviously I didn't know too much about Maccabi Tel Aviv before but... I spoke to Jordi Cruyff about the club and what was going on there.

"It wasn't a case of distance, it was about the right fit. That's more important to me than any kind of distance.

"This is only my second loan move since I went to Greenock Morton when I was 17 or 18, but this is a bit different.

"The coach comes from Barcelona, everything Barcelona-esque is brilliant, so that was a big, big exciting point in coming.

"Straight away over the last couple of days I've learnt a lot already, the style of play and everything.

"They've been in Europe [Europa League] last year, so they've got some good quality here."

Earnshaw made his Maccabi debut on Monday night, coming off the bench for their 3-0 Premier League win at home against Ironi Kiryat Shmona.

With what he has already experienced in his first week with his new club, Earnshaw has not ruled out making the move permanent should things go well on the field.

"You never know. The place is amazing; I'm in a hotel by the beach and when I finish training I can rest up, go to the beach or whatever," Earnshaw added.

"The first couple of days the training and the tactics and... the way of playing 'total football', passing the ball and movement and everything like that has been brilliant.

"So it's something where you never know, it could be a possibility.

"I need to enjoy football. I need to play and it's frustrating when you don't play and you think you can make a difference - that's the worst part."