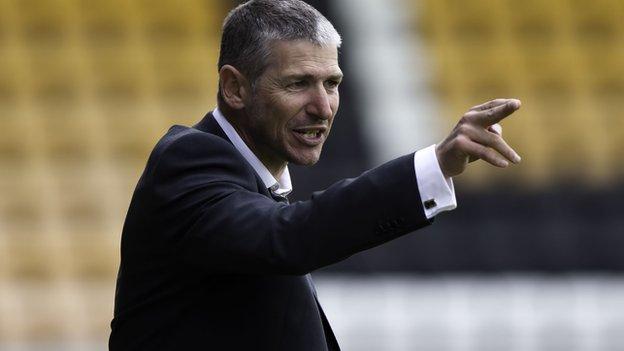 Cambridge United manager Jez George has indicated he will consider making changes for the visit of Kidderminster to the Abbey Stadium this week.

George told BBC Radio Cambridgeshire: "Whoever we feel has got the right attitude and wants to be here will be involved in the selection process."

The manager's team selection was questioned by some supporters after

George said there were no personality clashes affecting his choice.

"We felt we should be loyal to the players who worked so hard against Telford in the [drawn] previous game, even though the result wasn't the one we were looking for," he said.

"But when you follow it with a disappointing result away from home and concede four goals, I'd be doing my job incorrectly if I didn't consider every option to try and improve the team."

Despite a run of seven games without victory, George insisted United were "not a million miles" away from becoming a winning team.

"Results would suggest we're quite a way off our best form, but we're frustrated more than anything because we made some good strides forward in the match against Telford, in the performance, and nine times out of 10 would have got a win.

"But one or two individual errors cost us, and Saturday against Hereford was again frustrating. To concede three goals in such a short period of time makes it impossible to win a game and is something you can't allow to happen.

"That's when we show our naivety and youth. But there's a lot of good things too, though when you aren't winning they get superseded by the things that aren't good enough."

Kidderminster are also struggling this season, but George warned supporters the game would still be a difficult one.

"I don't think anyone would have predicted Kidderminster would have been in the position they're in now, going 10 games without a win, and it shows football isn't as simple as turning up and winning," he said.

"Our supporters understand the situation we're in and that the young players need their help and backing. That's the definition of a supporter."