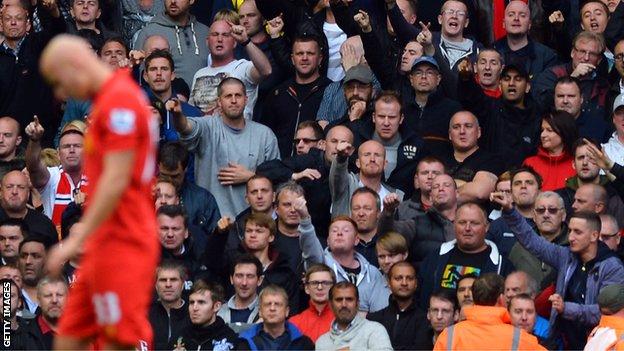 Premier League managers are in critical form after some controversial decisions in recent matches.

Jonjo Shelvey's tackle for Liverpool against Manchester United on Sunday earned a sending-off while David Luiz's challenge for Chelsea against Stoke resulted in just a booking.

Liverpool manager Brendan Rodgers thought the decision to send his man off was harsh, while Stoke boss Tony Pulis was incensed that Luiz managed to stay on the pitch.

Where's the line between a decent challenge and a sending-off offence?

Effectively there are four types of challenge - firstly a correct tackle, where the player fairly wins the ball and there is no impact on their opponent, the vast majority of challenges.

A small element are careless - the player makes a legitimate attempt but either in their timing or the skill of the opponent, they foul the other player and a free kick is given.

If the tackle is reckless in nature, the player is booked, a yellow card is given.

If a player endangers the safety of their opponent, it's a red card, a sending-off.

A tackle happens in a blink of an eye and in that second, the referee must consider lots of factors. Was it careless? Did the player show a lack of regard for his opponent's safety? Or did he use excessive force? There is also the state of the pitch, the conditions and the state of the game.

What makes a red card tackle stand out?

The advice to players is to be mindful of their responsibilities towards an opponent and beware that if they commit to a tackle, at speed, with intensity, with two feet off the ground, they run the risk of being sent off.

The advice from referees and assistants to players is to put themselves in their opponent's place and ask: "Can I make this challenge without having an adverse effect on my opponent?"

Referees look for the intensity, and the physical contact that's made.

What about the angle of the tackle, if the player wins the ball, if studs are up or down?

The angle is not important, it's the degree of intensity and contact made.

And a player could win the ball with one foot and still endanger their opponent with the other. A decade ago, if a player won the ball, the tackle could be seen as legitimate, but now the emphasis is on the safety of the players.

The number of free-kicks given has declined in Premier League games and is amongst the lowest per game of any major league worldwide.

With studs, almost by definition, if a player is going into a tackle two-footed, airborne, their studs raised, then they cannot control their velocity and risk a red card.

How do referees try to ensure uniformity across the league?

At the start of every season the Professional Game Match Officials - the body which runs refereeing in England - visit clubs and go through examples of controversial incidents.

They tell players and management staff that if players commit to a challenge at speed with both feet off the ground they risk a red card.

If there is a spate of controversial decisions, the PGMO comes together with the PFA and LMA and re-issues the guidelines on what is an acceptable challenge - to try to reach a common understanding and interpretation of the rules.

The "select group" of the Premier League's 16 referees and 30 assistant referees meet every two weeks to review and discuss incidents. Their performance is also reviewed using a post-match analysis computer system.