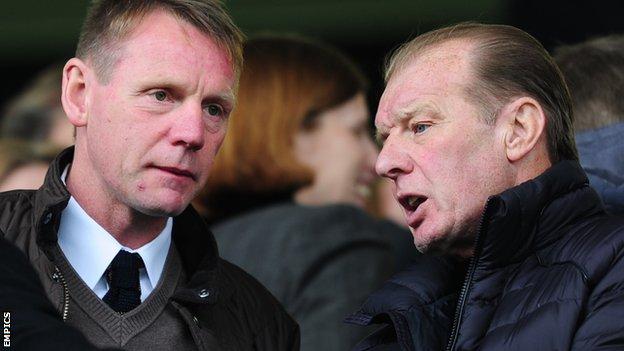 AFC Wimbledon chief executive Erik Samuelson says that Dave Bassett will be involved in their search for a new manager to replace Terry Brown.

Bassett led the old Wimbledon FC from the Fourth Division to the top tier of English football in the 1980s.

Samuelson told BBC London 94.9: "There's several people I could see running the club but I think we have to have a cool look at it.

"We have to make sure we learn from his knowledge of the game."

He added: "We need to make sure we don't make a romantic decision or one where we don't know as much about the man as we want to.

"That's part of the way he can help.

"You can ask as many questions as you like in an interview but if someone says 'I know him' it makes a hell of a difference."

Samuelson says the Dons have had around 40 applications for the vacant post at Kingsmeadow.

"There are lots of names you'd know, a few surprising ones and a couple from left-field," he continued.

"The idea is we'll get a long list of about seven or eight and I'll interview them with Dave.

"We'll get it down to two or three and then the main board will make a decision. I can't see it happening before Saturday."