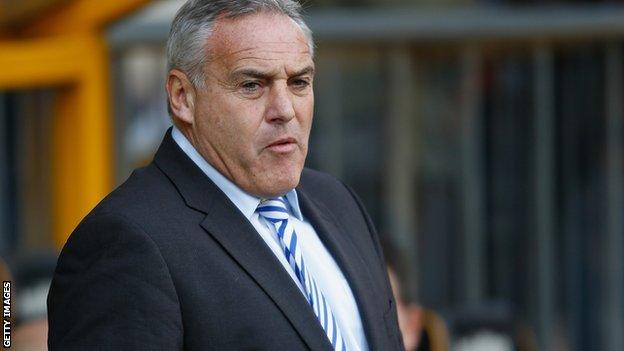 Sheffield Wednesday came from a goal down three times to draw at Burnley.

Charlie Austin headed home a Kieran Trippier cross for Burnley only for Chris O'Grady to immediately respond by nodding in an equaliser.

It seemed Burnley were set for a win when Austin completed his hat-trick with a 20-yard shot but Michail Antonio struck from 25-yards for the visitors.

The draw ensured Sheffield Wednesday ended a six-match losing sequence and relieved some of the pressure on manager Dave Jones.

An entertaining match had started at a fast pace, with both sides trading chances before Austin gave the hosts the lead.

But, from the kick-off, Antonio ran into the Burnley area and found O'Grady, who headed in from 12 yards.

Both defences were coming under pressure and Burnley keeper Lee Grant did well to keep out a powerful strike from Ross Barkley, who also steered a shot wide from six yards.

Austin punished the miss when he scored after Jermaine Johnson failed to clear.

The visitors survived a spell of pressure before they equalised again when Jay Bothroyd set up O'Grady, who sent a shot into the bottom corner.

Austin and Antonio scored late on with long-range strikes for their teams as both had to settle for a draw.

Burnley boss Eddie Howe on his side's defensive failings: "I'm hugely frustrated and hugely disappointed. I thought we were excellent first half.

"You can't need to score four to win a game but it's been the same story this season. The beauty of it is in football you always get a chance to put it right and there is a lot of defensive work for the lads to do.

"Charlie Austin scored a great third goal and you think we have wrapped it up but it wasn't to be and we have a lot of work to do.

"The goals were poor goals. We talked about the first goal but what we didn't talk about is conceding so soon after."

"We have had 15 shots to their six or seven and I think if we had defended a little bit better then we may have a little bit more but I can't fault them.