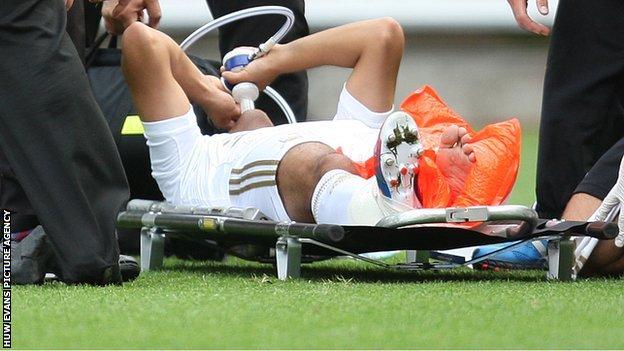 Swansea City defender Neil Taylor has pledged to come back fitter and stronger from the broken ankle that ended his season.

The 23-year-old had surgery after suffering multiple fractures in the 2-2 draw with Sunderland on 1 September.

He has just begun his rehabilitation and is in a positive frame of mind.

Taylor suffered the injury when falling awkwardly 15 minutes into the game at the Liberty Stadium.

You have to put it into perspective. Although it's a broken ankle and I'm upset, I'm in a privileged position

His foot was trapped underneath him as he fell to the ground, taking the full weight of Sunderland's Craig Gardner on the way down.

Initially, Taylor feared the worst about his long-term prospects but after a successful operation the Wales international was told he had a 90% chance of playing again.

"If the ankle holds up, which I'm confident it will, I can come back better. I've got to be positive," he continued.

And he says he has been inspired by watching this summer's Paralympics.

"I watched the Paralympics from [my hospital bed]," revealed the Wales international, who played football for Team GB at the Olympics.

"When you watch that sort of thing, you think 'how can I lie here and complain when these people have overcome massive hurdles to get where they are?' You do get inspired.

"You have to put it into perspective sometimes. Although it's a broken ankle and I'm upset, I'm in a privileged position. I'm still a Premier League footballer and you have to look on the positive side of things.

"I'm three weeks in and it looks really good. Things are looking hopeful."