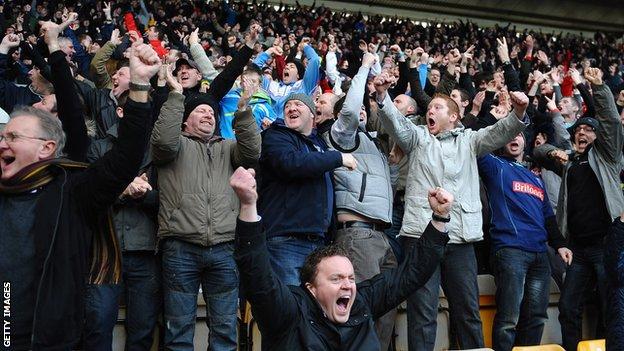 Dynamic pricing. This is how we have paid for train tickets, hotel rooms, flights and theatre tickets for years. Pay on the day and you know you will have to pay more.

Football could be next.

If you head down to Cardiff, Derby or Bristol City this season there's a good chance you will be sat next to someone who has paid a fraction of the cost of your ticket.

The three Championship teams are the first in Britain to bring in the system, which has been pioneered in American sports and sees prices change daily based on demand.

If it proves a success, more clubs could follow.

Dynamic pricing involves charging for games according to the perceived attractiveness of the match. Tickets are always slightly more expensive than the price the season ticket holder is judged to have paid for that fixture.

Prices start as low as £10 for some matches, but the nearer you get to matchday, the more likely it is that the price will rise. There is in effect no maximum price. If there are only a handful of tickets left on matchday then the cost could increase considerably.

The aim is to increase attendances while allowing the clubs to capitalise when there is great demand.

But clubs believe the system allows supporters to bag a bargain - if they get in early.

How a £300 season ticket is priced at Derby

"People in this economy are looking for value for money and we are providing it," says John Vicars, vice-president of operations at Derby.

"We are trying to be inclusive and make it affordable - but if you roll up at five to three on a Saturday afternoon then just accept the fact that you'll be paying more than the guy who bought his tickets six weeks ago."

Crucially, the whole system works by changing the mindset of season ticket holders - loyal supporters who always pay less than anyone else and who traditionally feel aggrieved if a club slashes prices for 'casual' fans.

He told BBC Sport: "We have to educate the season ticket holder that no longer are they paying the same price for every game.

"What they won't say is that the Bolton game may cost them £20, and the Barnsley game on a Tuesday night may be £8 to them. If they accept that variety, that allows us to discount the Barnsley game down to £10 for other ticket holders."

View from the States

Baseball team the San Francisco Giants were the first sports team to use dynamic pricing.

Head of ticket sales and services Russ Stanley explains why:

"For 20 games a year we are now able to advertise an $8 ticket. That's less than it costs to go and see a movie. That's a powerful message.

"You want to sell as many tickets as possible. The atmosphere inside the stadium is so much better when it is full. If you are not pricing your product properly, you will not sell out."

The Giants are on a run of 165 sell-outs in a row and have increased revenue by 7% since moving to dynamic pricing.

Crucially, individual tickets do not go on sale for less than the dynamic price a season ticket holder has paid.

Once the 'base price' has been established - slightly above what season ticket holders are charged - software then tracks demand and suggests daily price changes.

Jenkins says the system has already proved a hit at Cardiff.

He said: "We are seeing a very full stadium every game so far.

"There is still work to be done in terms of educating our supporters that the earlier they buy the less they pay, but what we are trying to do is make it affordable for everyone."

As a whole, attendances in the Championship were slightly up on average last year, with Derby averaging 26,020 last season.

That was the third-highest behind promoted Southampton and West Ham, but still meant that on average Pride Park had nearly 7,000 empty seats at every game.

Derby decided to move into dynamic pricing after a trial on the website Groupon saw them sell 3,000 of those tickets - priced at £20 for two adults - in just 12 hours. Three quarters of the purchasers were either brand new customers or fans who had not attended for at least two years.

"The Football League has regulations in places to ensure that fans in similar areas of the stadium are paying the same price regardless of whether they are supporting the home or away team. Clubs are required to submit their ticket prices to the Football League at the beginning of each season. Derby County have been given permission to trial dynamic ticket pricing in specific areas of their stadium. This does not include the away supporter section or the equivalent area for home supporters where set ticket prices apply."

Vicars said: "We formed our opinion that there was a price point which would enable us to entice new supporters to the club and win back fans who had for whatever reason stopped attending.

"People have told us that they can't afford £25-30 for a ticket. Those are the facts. We could have buried our heads in the sand and continued to charge those prices, or you can try to make it more affordable.

"Having a full stadium can only help the team, and having a load of empty seats in the stadium doesn't do the league any favours when you see the pictures on TV."

Bristol City are the third club to bring in the system this season, though not for all games.

Commercial director Kevin Smith has also seen the benefits. He said: "The more affordable it is for fans, hopefully the more they will arrive to get behind the team."

The message is clear: Buy early, buy cheap. Dynamic pricing could be coming to your club soon.