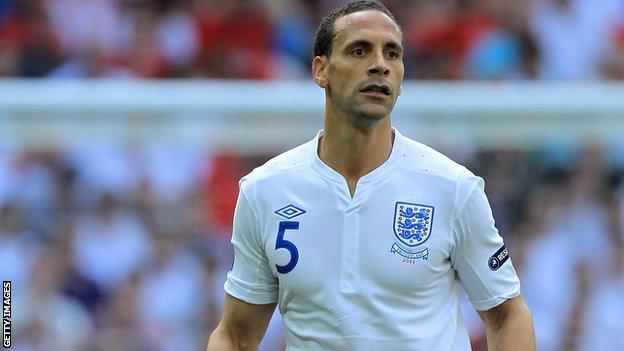 Rio Ferdinand should not be recalled to the national side because his "time has gone", according to former England captain Peter Shilton.

Shilton, England's most-capped player, said: "I don't feel Rio should come back. We have to look to the future."

Ferdinand's last international appearance came in June last year, when England drew 2-2 with Switzerland in a Euro 2012 qualifier at Wembley.

The 33-year-old centre-half, who has 81 caps for his country, was not selected for the finals in Poland and Ukraine, with Hodgson citing "football reasons" for not picking the Manchester United centre-half.

Terry, 31, was cleared at court of that charge, but this week quit international football the day before a Football Association hearing into the matter got under way, claiming his position with England had been made "untenable" as a result.

There had been speculation Terry's decision may prompt Ferdinand's return to the England set-up, but Shilton thinks that would be a bad move.

The former goalkeeper, who made 1,005 league appearances in a career lasting 31 years until his retirement in 1997, said: "His time has gone. We have to look to the future and I would look to the youth.

"Cahill is someone I've always admired and I thought Lescott had an excellent Euros. At the moment, I'd go with those two."

He made his last appearance for his country earlier this month, when England beat Moldova 5-0 in a World Cup qualifier.

Shilton thinks Terry was one of the outstanding players at Euro 2012 and says his international retirement is "premature".

"Reading the press, I think Roy Hodgson feels the same way," said the 63-year-old. "Terry was recognised not only for his playing ability, but also for his leadership qualities."