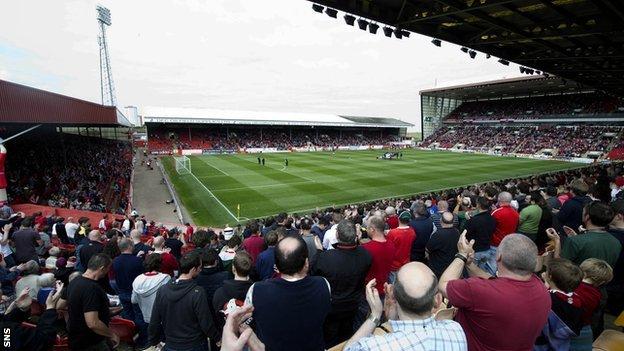 Aberdeen have confirmed they have had several expressions of interest in providing a site for a new stadium.

The club launched a search for a new home after the collapse of a bid to build a 21,000-seater ground at Calder Park in the south of the city.

The Dons had planned to move to the new stadium in time for the 2014-15 season.

However, Aberdeen City Council rejected a proposed leisure centre in Cove which the club were planning on using as a training facility.

Aberdeen are now conducting a review of the potential options but say it is too early to publicly identify them.

Vice-chairman George Yule, who had previously refused to rule out the possibility of the club moving out of the city, announced the interest on the club's official website.

"Although I can confirm that the club has received several expressions of interest for potential/alternative stadium sites, we are still at a very early stage of carrying out a full review of these options," he said.

"There is a considerable amount of preliminary diligence to be undertaken before we decide on the best-suited outcome for AFC.

"We will take whatever time is required to complete this review in the very best interests of AFC and its supporters."