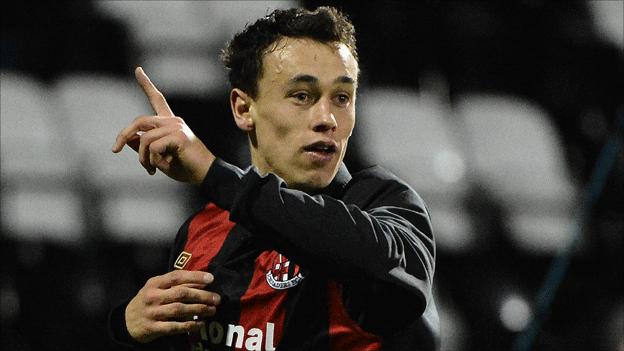 Crusaders progressed to the semi-finals of the County Antrim Shield by beating Championship One side Bangor, despite having David Magowan sent-off late on.

Brian Hylands was unfortunate to head into his own net in the 41st minute.

The Crues extended their lead when Paul Heatley's shot was deflected in off the ankle of John Watterson 45 minutes.

Thomas Lambe scored a consolation goal for Bangor on 67 minutes with a header from a Gareth McLaughlin corner, while Magowan was red-carded on 72 minutes.

Crusaders failed to impress in the early part of the game but took the lead thanks to the first of the own goals four minutes before half-time.

Stephen McBride took a free-kick, Jordan Owens saw his header cannon off the bar and the ball rebounded onto the head of Hylands, who was unable to get out of the way.

With the score at 2-1, Crues substitute Magowan received a straight red card after bringing down Christopher Shimmon as he made towards goal.

The defender had only been on the pitch for 90 seconds prior to the incident.

Shimmon almost levelled with six minutes remaining but smashed the ball off the post.