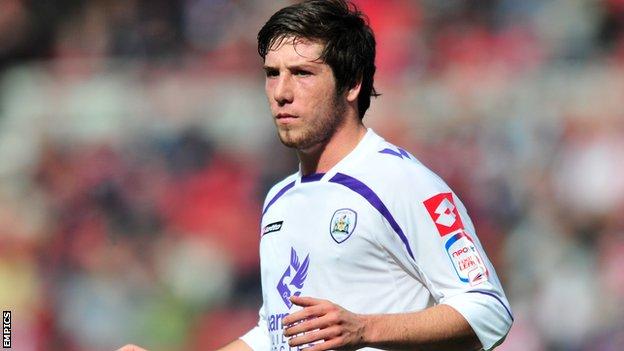 Norwich City midfielder Jacob Butterfield has admitted enduring a number of "down days" during his long battle to recover from a knee injury.

The Canaries signed the 22-year-old from Barnsley in July on a four-year contract, even though he had not played since December 2011.

He will finally make his Norwich debut against Doncaster on Wednesday evening.

"With an injury like that, the mental side is the toughest bit, you get a lot of down days," said Butterfield.

"You feel like you're not getting anywhere and, signing for a new club, I was desperate to get over it as soon as possible and get on the pitch."

Butterfield damaged his anterior cruciate ligament in Barnsley's 4-1 derby victory over Leeds on New Year's Eve and an operation was necessary to repair the damage.

He added: "It's the first time I've experienced it [a serious injury].

"Signing for Norwich gave me a little boost in the summer; a bit of encouragement to keep working hard to get back fit.

Signing for Norwich gave me a little boost in the summer; a bit of encouragement to keep working hard to get back fit

"I'm glad I'm ready to go now because it seems like I've been here a lifetime, waiting for that chance."

"It is a hamstring, but it's a very mild hamstring and we need to assess it over the next few days and see how we get on for the weekend," said Hughton.

"That is good news because with hamstrings they can drag on a little bit and be difficult, but we hope he'll be back sooner rather than later."