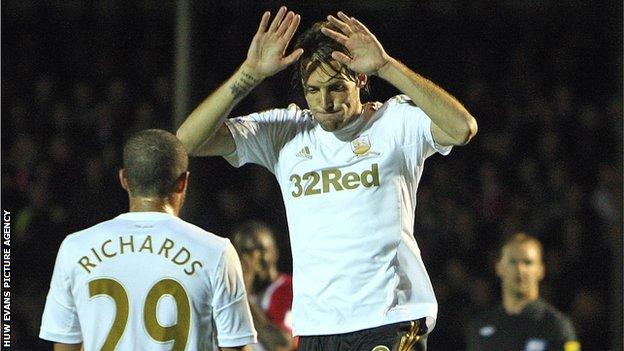 Swansea manager Michael Laudrup said he took plenty of positives out of their despite being given a scare by Crawley Town.

Miguel Michu had given the Premier League visitors the lead but League One Crawley struck back to go ahead.

It needed an equaliser from substitute Danny Graham and an injury-time winner from Garry Monk to spare Swansea blushes and book a fourth-round spot.

"Even if Crawley play in League One and we play in the Premier League, these games are different and especially when you play away on a small ground... everybody is watching to see if there is a big surprise.

You can always dream about going to play the finals at Wembley. That's what the cup is all about

"When we were 2-1 down... I really wanted to see the reaction from the players and I think the reaction was very good.

"The next question may be 'why do you need to be down 2-1 to react?', well that may be psychological but there was a very good reaction.

"I think we played well the first half-hour, we could have scored a couple more goals, but they scored a goal just before half-time then they started the second half very well."

Swansea came into the League Cup encounter after back-to-back defeats in the Premier League, with Laudrup opting to give his fringe players the chance of some game time against Crawley.

"It was great that some of the players who haven't played regularly in the first games this season came on," Laudrup said.

"Garry Monk, his first game in a long, long time after his back injury and other players as well. I think that's good for the squad because we need players match-fit.

"An injury here, a red card there or some bookings and it's very important that the players who come into the side... they are match-fit.

"So that's why they are really great, these cup games and then it's a possibility as well for smaller clubs like us to maybe go far in a competition... you can always dream about going to play the finals at Wembley. That's what the cup is all about."