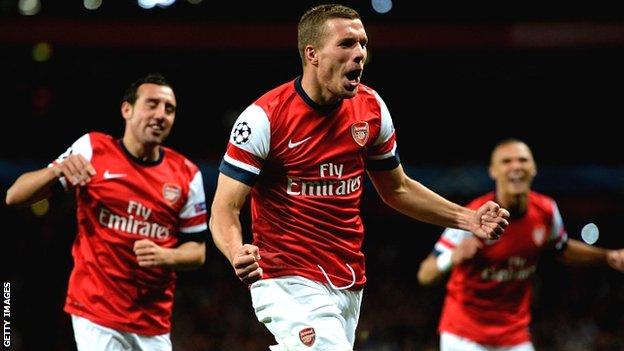 Arsenal recovered from an unconvincing first-half performance to see off Olympiakos at Emirates Stadium and move top of Champions League Group B.

Olympiakos deservedly hit straight back through Kostas Mitroglou's superb header on the stroke of half-time.

But Lukas Podolski rifled the Gunners back in front and Aaron Ramsey came off the bench to flick a third.

The result ensures Arsenal go clear at the head of their group on six points after Schalke drew 2-2 with Montpellier.

It was a laboured display but boss Arsene Wenger will hardly worry if his side continue to collect points while not at their best.

Wenger admitted before the match "the players are still down" from - and it was evident in the first half.

Undone by some poor defending against the Blues, there was little to suggest lessons had been learned as possession was relinquished cheaply and alarming errors were made at the back.

Only five minutes had been played when Vito Mannone's attempted pass to Thomas Vermaelen missed its target and prompted panic.

Arsenal soon created their first chance - Santi Cazorla's free-kick tipped to safety - but that was a rare opening for the hosts.

Captain Vermaelen and centre-back partner Laurent Koscielny - at fault for both Chelsea goals and possibly retaining his place because of Per Mertesacker's illness - were particularly unconvincing.

Koscielny was cautioned for a reckless challenge on Paulo Machado before Vermaelen's poor clearance led to Mitroglou drawing a fine save from Mannone.

Central defence was again vacant as Machado met a Giannis Maniatis cross from the right, only to somehow put a half-volley over the bar.

Arsenal's concerns were eased shortly before the break when Gervinho stepped past an opponent and he drilled the opener following neat work from Podolski and Cazorla on the left.

However, they immediately switched off and Mitroglou outjumped Vermaelen to glance a brilliant header past Mannone from Leandro Greco's left-wing cross.

Serving the second match of a three-game touchline ban, Wenger looked far from happy as he watched on from the stands.

But his team came out for the second half with a greater sense of purpose, Gervinho cutting back for Cazorla to side-foot wide.

The pressure was mounting and it swiftly told as the tireless Gervinho fed Podolski and he fired powerfully through Megyeri's legs.

Wenger introduced Theo Walcott and Olivier Giroud, and the England winger crossed for the France striker to volley at Balazs Magyeri.

Olympiakos were missing almost half of their usual first team through injury, and it began to show as Arsenal piled forward.

Giroud's first-time strike was blocked by Dimitris Siovas's shoulder before Ramsey, another substitute, latched on to the Frenchman's flick, outpaced Maniatis and dinked a fine finish past Magyeri.