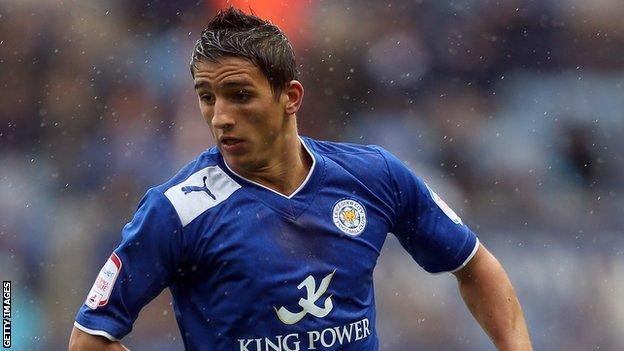 Anthony Knockaert scored twice as Leicester won at Huddersfield to move up to second in the Championship.

The French winger opened the scoring 15 minutes before the break with a stunning goal from 30 yards.

The visitors dominated after that and deservedly scored a second on the hour through Knockaert's clever flick.

Huddersfield made three substitutions straight after as they looked to respond but Leicester held firm for their second away win of the season.

For Huddersfield, it was their second-successive defeat after they lost to Watford at the weekend and saw them drop out of the top six.

Leicester went into the game having won their three previous matches and they started brightly.

David Nugent was just wide with an effort from distance while former Halifax striker Jamie Vardy saw a shot from outside the area denied by Huddersfield keeper Alex Smithies.

But Leicester's opener came out of nothing as Knockaert despatched a 35-yard drive on the half hour that left Smithies with no chance.

Andy King shot wide from 12 yards just before the break as Leicester looked for a second. It duly arrived in the 60th minute, again from Knockaert, who flicked home from Paul Konchesky's cross.

It appeared to have the desired result as the home side enjoyed a sustained spell of pressure.

However, it was Leicester who come closest in the last minute of the game as Smithies did well to deny Nugent from point-blank range.

Huddersfield manager Simon Grayson: "We have had a reality check in the last two games.

"We lost against Watford on Saturday and I thought this was a great opportunity to get that out of our system.

"We were beaten by the better side but, more than that, we didn't perform to our capabilities."

Leicester manager Nigel Pearson: "The two goals were great. [Knockaert] certainly let fly for the first one. He had the breeze behind him but it was a fantastic strike.

"The second one was superb improvisation but you need ability to do that. He is certainly a potential match winner for us but he is still a young player.

"He has shown there is a bit of an edge to him as well and we have to help him control that."