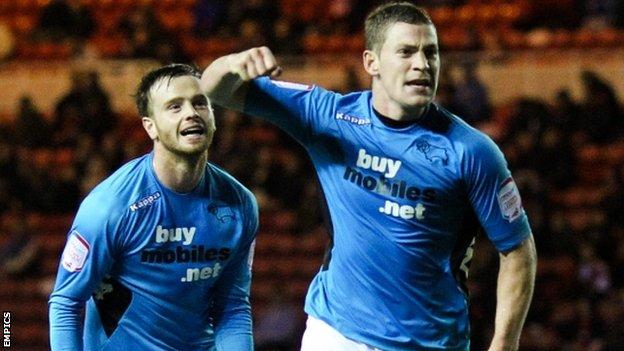 A late Paul Coutts equaliser saw Derby come from behind to secure their first point at Middlesbrough in 12 years.

The 24-year-old Scot scored with three minutes left to deny the hosts the chance to climb to eighth in the table.

Derby striker Theo Robinson had seen his early penalty cancelled out as Lukas Jutkiewicz scored twice for Middlesbrough to turn the game.

But with time running out Coutts thumped home after a goalmouth scramble to earn Derby a share of the points.

Derby travelled to Teeside having lost their past six matches at the Riverside.

And it was Middlesbrough who enjoyed the best of the opening exchanges, although Jutkiewicz scooped Grant Leadbitter's free-kick over the crossbar early on.

Derby took full advantage as they snatched the lead in the 16th minute. A swift Rams counter-attack saw Craig Bryson surge into the area and go down under the challenge of Andre Bikey. Robinson confidently tucked home the resulting spot-kick.

The Polish striker nearly made it two after slicing Justin Hoyte's pullback wide but Derby weathered the storm.

Middlesbrough's attacks gradually grew more effective as the second half wore on and 10 minutes from time Jutkiewicz headed Merouane Zemmama's clever chip into the top corner of the net.

Boro let their guard slip to allow Coutts to thump home from close range in the 87th minute.

Derby might have completed their first victory on Teesside since 2000 had Robinson kept his composure when presented with another clear chance just before the final whistle.