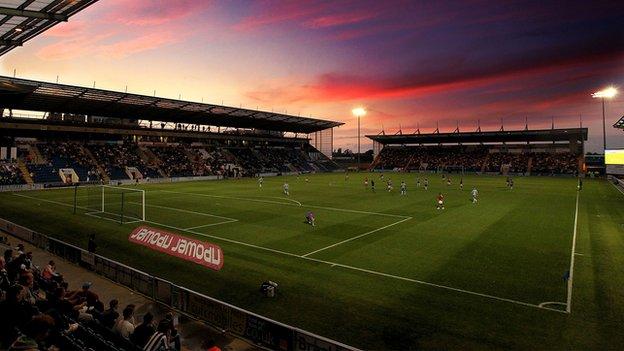 Colchester United caretaker manager Joe Dunne says he does not intend to "baby-sit" the club while the search for a new boss is conducted.

The U's are on the hunt for a replacement for John Ward, who was sacked on Monday.

Dunne told BBC Essex: "I certainly don't want to baby-sit. I want to get my ideas across.

"Last time I did the caretaker role, I was looking after it for the next manager. This time I feel differently."

He was also caretaker manager of the U's after the resignation of Paul Lambert in August 2009 and won one of his four matches in charge before Aidy Boothroyd took over.

Dunne's second spell as caretaker manager starts at home against Hartlepool on Saturday.

He added: "I've told the chairman what I believe we can do. I have a philosophy how I want the game to be played.

"It's not a philosophy that's come to me overnight. I've had ten years doing this."

Colchester are yet to win a match this season and are languishing in 22nd in the League One table.

Despite the poor start, Dunne does not think there is much missing from the squad.

He said: "The people I know who have played for this club in every era will tell me what they did and how they did it.

"It's not much different to how I did it in 1998 when we got promoted, and when Parky (Phil Parkinson) took us up to the Championship.

"With that effort and that commitment, these days you just need to add a bit of quality to it, so we will see where we go."

Dunne had his first spell as caretaker manager in 2009.