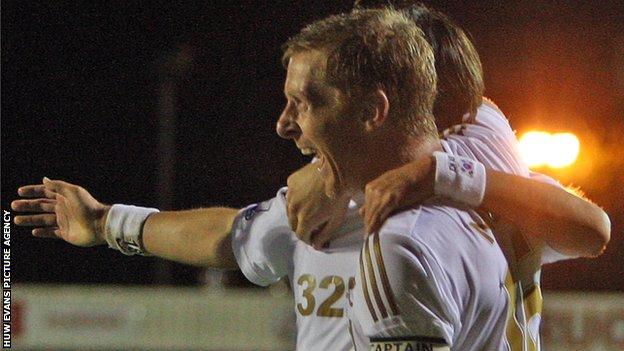 Garry Monk insists he wants to remain a Swansea City player, but understands he might have to leave to play more often.

The club captain scored Swansea's winner in their 3-2 Capital One Cup third round clash at Crawley Town.

But that was his first appearance under new manager Michael Laudrup because of injury and selection policy.

"I've said all along this is a club I love. I don't want to be away from this club. I want to stay here and fight for my place," said Monk.

The 33-year-old defender has been a Swansea City player since 2004 and was captain when they gained promotion to the Premier League in 2010.

Monk figured in 16 league matches in the 2011-12 campaign, but he has not featured in the top flight this season because of a back injury and Laudrup's selection of Ashley Williams and Chico Flores as his preferred centre-back combination.

A move away from the Liberty Stadium has been mooted, and a loan switch to Championship side Bristol City was close in August before injury struck.

On a potential move Monk said: "You can never say never. It's not my priority. I don't want to do that - I want to stay here and I have made that clear.

"Obviously games and match-time dictate that and whether or not I am in match-day squads.

"I have to build on what I did [at Crawley] and try and improve and try and work my way into the manager's plans.

"If it's not to be then I have to assess my options then. At the moment I just want to get fit and then more fit."

Monk struck in injury time at Crawley on Tuesday to ensure Swansea avoided a cup upset. He said he was just glad to get back on the field for his first competitive 90 minutes since the end of April.

"I just wanted to get out there. I wasn't the sharpest in terms of match fitness but the only way to get that is to play matches.

"I managed to finish off 90 minutes which was good and to get the goal at the end is an extra bonus.

"I've been injured for five weeks and obviously that has dictated any sort of movement [to another club] or if there was going to be anything.

"I just want to focus on getting fit."